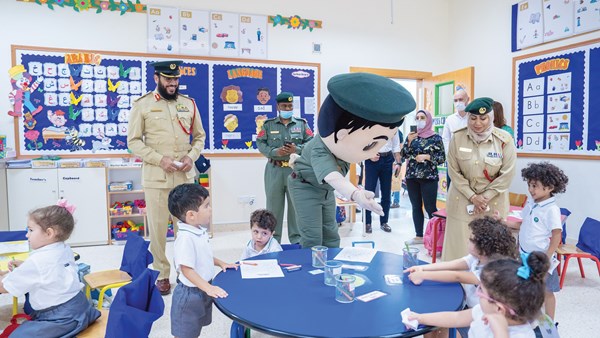 Major General Dr. Adel Al-Suwaidi, director of Jebel Ali Police Station, visited Choueifat School in Dubai Investments Park and was received by Suhair Ghandour, school director and faculty members, which comes as part of the “School Safety” initiative aimed at strengthening community partnership between police and educational institutions.
Major General Adel Al-Suwaidi, on behalf of the Dubai Police General Command, congratulated male and female students, members of the educational, administrative and technical staff and parents on the occasion of the start of the new academic year and wished them success in their academic year.
Major General Al-Suwaidi enjoined the students to pay attention to education, to be a role model for their colleagues and a source of pride for their families, and to make more efforts to collect lessons so that they can achieve their goals, noting that Jebel Ali Police Station, in collaboration with the General Traffic Department, will intensify patrolling in school areas to maintain smooth traffic flow. It will also organize awareness talks in schools during the academic year.
Major General Al-Suwaidi met with the school’s faculty members and gave them an explanation of the “School Safety” initiative, which aims to strengthen the community partnership between the police and educational institutions and help build a generation that is aware and educated in safety and traffic.
At the end of the visit, he visited a number of classrooms and the school’s laboratory and met a number of students and gifts were distributed to them with the participation of policeman Mansour.

UAE weather: Humid with a chance of rain; temperature to hit 43°C