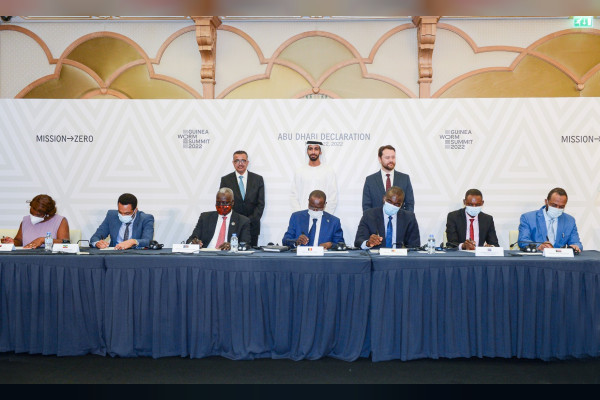 Ministers and dignitaries endorsed the Abu Dhabi Declaration on the Eradication of Guinea Worm Disease to ensure the neglected tropical disease becomes the first human disease to be eradicated since smallpox in 1980.

Assembling at the UAE’s presidential palace, Qasr Al Watan, leaders from Chad, Ethiopia, South Sudan, Angola, Sudan, the Democratic Republic of the Congo, and Cameroon confirmed their commitment by signing the declaration.

The Abu Dhabi Declaration was agreed upon at the conclusion of the 2022 Guinea Worm Summit, a high-level, three-day event co-hosted by The Carter Center and Reaching the Last Mile, a portfolio of global health programs working toward disease elimination that is driven by the personal commitment of His Highness Sheikh Mohamed bin Zayed Al Nahyan, Crown Prince of Abu Dhabi and Deputy Supreme Commander of the UAE Armed Forcesز A sense of urgency surrounded this week’s summit with dignitaries from formerly endemic countries and partner countries on hand to offer support to the nations where the disease remains. Donor countries and organizations also renewed their pledges to support the campaign.

In 2021, just 15 human cases of Guinea worm disease were reported in four countries. When The Carter Center assumed leadership of the eradication campaign in 1986, an estimated 3.5 million cases occurred annually in 21 countries.

“Thanks to the commitment of The Carter Center and partners around the world, we have made incredible progress towards ending Guinea worm disease – but the work is not over. This week we were honored to convene global champions of the eradication effort in Abu Dhabi to renew our shared commitment towards reaching that last mile of disease eradication,” said Sheikh Shakhboot bin Nahyan Al Nahyan, Minister of State, Ministry of Foreign Affairs and International Cooperation. “It is a privilege to continue the legacy of the founder of our nation, Sheikh Zayed bin Sultan Al Nahyan, who believed no one should suffer from a preventable disease. Reaching the last mile of Guinea worm disease cannot come soon enough.”

In July 1990, the late Sheikh Zayed bin Sultan Al Nahyan, founding father of the UAE, invited former U.S. President Jimmy Carter to the UAE for the first time. During the meeting, President Carter described his initiative to wipe out a parasitic disease affecting millions of people across Africa and Asia. The late Sheikh Zayed responded with a substantial personal donation to The Carter Center, which established the Abu Dhabi ruling family’s more than 30-year commitment to disease eradication.

The Carter Center, founded by former President Carter and his wife, Rosalynn, 40 years ago, seeks to capitalize on recent momentum achieved in battling the disease.

“We observed a dramatic reduction in both human cases and animal infections last year, and I want to help our country partners continue this progress,” said Adam J. Weiss, director of the Guinea Worm Eradication Program at The Carter Center. “The final part of any eradication campaign is the most difficult and expensive, and significant resources are being devoted to eradicating Guinea worm disease. We need to be aggressive to achieve eradication, and this recommitment comes at just the right time.”

“We are more than 99% of the way towards consigning Guinea worm to history, but the last mile is the hardest, and the gains we have made can be easily lost,” said Dr. Tedros. “Our goal is tantalizingly close, but we need relentless political commitment, fidelity to science, more village volunteers, and sustained financial resources to finish the job and ensure future generations live free of this terrible disease.”

Guinea worm disease is a particularly devastating disease that incapacitates people for extended periods of time, making them unable to care for themselves, work, grow food for their families, or attend school. The disease is contracted by drinking water contaminated with Guinea worm larvae. About a year later, the adult Guinea worm creates a painful lesion in the skin and slowly emerges. Sufferers may seek relief by immersing their limbs in water, stimulating the worm to release its larvae and renewing the cycle of infection.

Big Heart Foundation distributed over AED31 million in 12 countries benefitting over 590,000 people in 2021