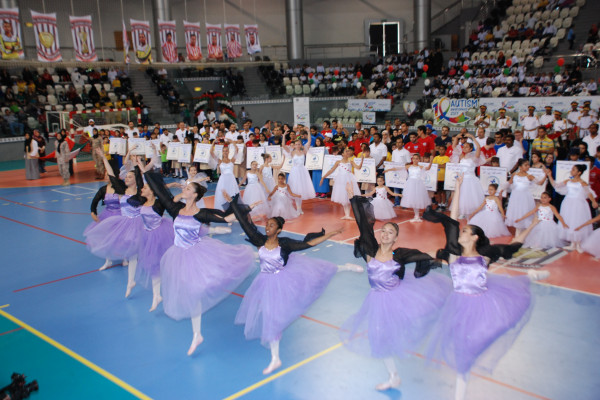 Organised by the Emirates Autism Centre (EAC) and in cooperation with the Abu Dhabi Chamber of Commerce and Industry, the event will run from 18th – 21st April 2022.

Celebrating the Autism Awareness Week, Dr. Amal Jalal Sabri, Managing Director of the EAC, said that this year’s autism week aims at instilling the concept of acceptance through announcing ‘Autism Acceptance Month’, the new name of the international month for celebrating autism. This comes along a campaign to shed light on the concept of neurodiversity in people with autism spectrum and respecting the difference in their methods of dealing with the information, steering clear from using unrealistic terms to describe them.

She added that the EAC also took an initiative by changing the logo of the Centre from shape of a puzzle and the blue color into a new logo that reflects the acceptance of difference and neurodiversity of the people with autism spectrum. The new logo contains the purple color and conveys three concepts; “diversity in the human brain is a normal aspect and a rich side of the human experiment and reflects the neurodiversity”, “the importance of listening to voices of the people with autism spectrum”, and “autism is a spectrum, which means that people with autism differ greatly in their social and knowledge capabilities”.

The first includes the Emirates Physical Fitness Championship for People of Determination on 19th April 2022, which will see the participation of more than 760 people of determination players from 88 centres and schools from the UAE, Egypt, Lebanon, Syria, Saudi Arabia, Kuwait, Bahrain, Oman, Morocco, and Tunisia.

The second half is a drawing competition for people of determination titled “Be Creative” in which ten Centres from within the UAE are taking part.

The Autism Awareness Week aims at raising social awareness and accepting the people with autism spectrum as well as opening up new doors of cooperation for corporations and individuals to share experiences in the field of autism spectrum and helping public and private corporations to adopt the concepts of social responsibility towards this group, which are in need for support and integration. The awareness campaign also aims at correcting the wrong concepts about people of autism spectrum.