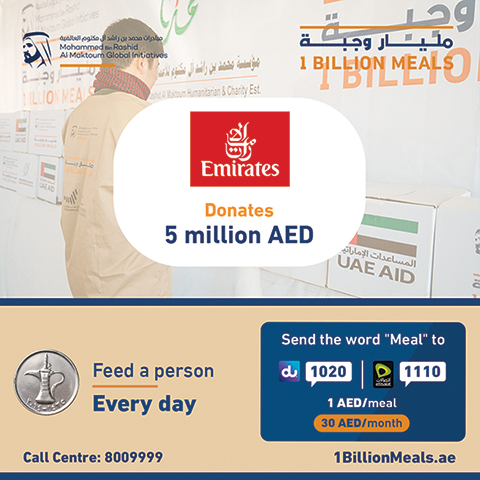 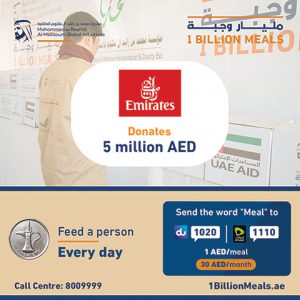 Emirates Group announced a donation of AED5 million to the “1 Billion Meals” initiative, the largest of its kind in the region, which aims to assist and provide sustainable food support to the underprivileged and most needy groups across 50 countries in the Middle East, North Africa and other parts of the world.
Emirates Group’s AED5-million-donation will secure five million meals to help alleviate the hunger experienced by people worldwide every day, especially vulnerable groups such as children, refugees, displaced persons and those affected by disasters and crises.
The initiative, organised by Mohammed bin Rashid Al Maktoum Global Initiatives, provides food support in coordination with the United Nations’ World Food Programme, the Food Banking Regional Network, the Mohammed bin Rashid Al Maktoum Humanitarian and Charity Establishment, the United Nations High Commissioner for Refugees, the UAE Food Bank, and a number of local charity and humanitarian organisations in beneficiary countries.
HH Sheikh Ahmed bin Saeed Al Maktoum, Chairman and Chief Executive of Emirates Group, said, “Emirates Group endorses the values and vision of the UAE, and we aim to make a meaningful impact on the communities we serve worldwide. The campaign embodies the UAE’s culture of giving and our aspirations for human solidarity. Emirates Group is proud to participate in this largest-of-its-kind humanitarian initiative in the region and play our part in providing meals support to people in need in over 50 countries.”

Donors can also opt to donate AED1 a day through a monthly subscription by sending “Meal” or “وجبة” via SMS to 1020 on the du network or 1110 on the Etisalat network. Donations can also be made through the campaign’s call centre via a toll-free number 8009999.