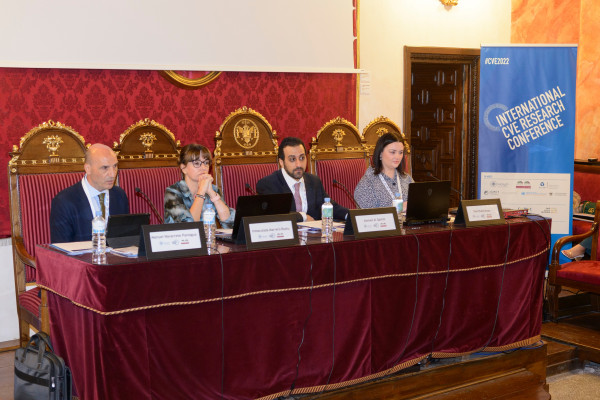 GRANADA, 26th May, 2022 (WAM) — In response to the ever-evolving violent extremist and terrorist threats, the Government of Spain, in cooperation with Hedayah, the International Centre of Excellence for Countering Violent Extremism (CVE), held the Seventh Annual International CVE Research Conference from 23rd to 25th May, 2022, in Granada, Spain.

Over a hundred researchers, government officials, academics, and development experts from around the world convened for the Conference.

With the increasing borderless movement of violent extremist ideologies online, research showed that gendered discourses are used by radical right actors to radicalise and mobilise others for their cause. This highlights the need for policymakers and practitioners to better understand the phenomena to develop effective and ethical intervention.

“The nature of terrorism and extremism is highly versatile and adaptive. Our current approaches in countering violent extremism are not enough to address future challenges that can affect various members of society, most importantly youth and women. We can address these challenges through different platforms, new technology and other innovative means,” said, Ahmed Al Qasimi, Executive Director of Hedayah.

Al Qasimi added, “This Conference aims to guide the international community around the latest threats and existing challenges, while presenting innovative ways and recommendations to deal with them in a proactive manner. Terrorism and extremism are not only limited to religious motivations, but are also dominated by social, educational and developmental influences. This requires our collective efforts to create strong societies to address this grave issue.”

Top researchers also shared their findings around the implications of COVID-19 on radicalisation and recruitment efforts and the impact of extreme positions on climate change among other topics.

With the UAE set to host COP28, Lana Nusseibeh, Assistant Minister for Political Affairs and UAE Ambassador and Permanent Representative to the UN, noted during her opening remarks that the UAE considers the relationship between climate change and violent extremism as an emerging threat to international peace and security, which exacerbates pre-existing challenges such as conflict and displacement and requires the international community to equip itself for a more robust response.

In recognition of the significance of the International CVE Research Conference, an official from the Government of Spain underscored the importance of hosting this Conference due to the need to address threats posed by terrorism as a top national priority. The official also expressed the Government of Spain’s support to Hedayah in the implementation of various CVE projects globally.

During her opening remarks, Ambassador Nancy Jamal, Bahrain’s Chief of Strategic Affairs, said, “To hone in on regional perspectives, Hedayah has managed over the years to combine perceptions from East and West, to build resilience where it is needed. Such a mandate that has succeeded in engaging the intellectual voices of the region within the scope of global peace, prosperity and stability is one we wholeheartedly encourage.”

Al Qasimi announced the launch of two key Hedayah initiatives. “The first initiative is a web platform that present global trends on violent extremism, terrorism, and the pandemic. The second is a research project on ‘Countering Extremism and Violent Extremism in the Middle East and North Africa”‘, which showcases the MENA countries’ efforts, experiences and best practices in addressing violent extremism over recent years,” he explained. “The participating countries shared their successful experiences with the international community and provided Hedayah with its most prominent efforts and practices in this regard. The participating countries have had a longstanding cooperation with Hedayah through previous programmes.”

Other key research findings presented at the Conference showed that the pandemic produced a hybridised threat to public safety between conspiracy movements and extremism. This requires a new generation of approaches beyond existing counter-extremism paradigms. Researchers at the Conference also showed the positive effects of sports intervention to prevent radicalisation and the role of video games and new technologies in recruitment.

The Conference was co-hosted with the Euro-Arab Foundation, the European Institute for Counter Terrorism and Conflict Prevention, the Global Internet Forum to Counter Terrorism, Moonshot, United Nations Office of Counter-Terrorism and the University of Granada, along with the strategic partnership of the Royal United Services Institute, the Cyber Threats Research Centre at Swansea University and Tech against Terrorism.