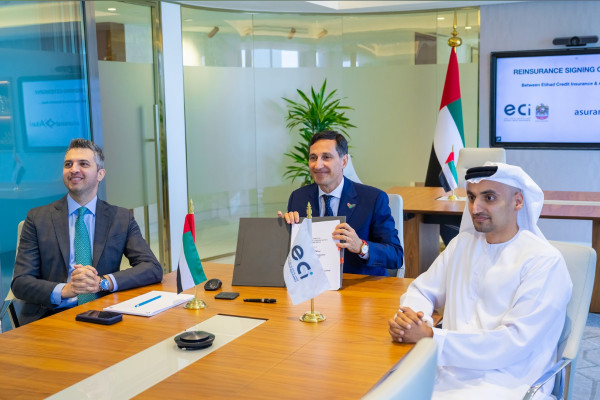 This pact follows the MoU signed between ECI and Indonesia Re, as part of a high-level delegation meeting of both countries’ ministers and government officials held in the UAE in November, in the presence of Dr. Thani bin Ahmed Al Zeyoudi, Minister of State for Foreign Trade and Deputy Chairman of ECI’s Board of Directors and Kartika Wirjoatmodjo, Vice Minister of State-Owned Enterprises of Indonesia.

Under the agreement, the two sides decided to join hands to reinforce the trade and economic cooperation by helping domestic companies of the respective countries grow overseas.

The agreement aims to build stronger collaboration between ECI and Indonesian Re to boost export relations between the two friendly nations by protecting businesses that want to venture into new markets from political, commercial, and noncommercial risks. The two state-owned institutions will make it easier for these companies to access liquidity and funds to pursue their international expansion.

Massimo Falcioni, CEO of ECI, commented, “The reinsurance agreement between ECI and Indonesia Re is a natural progression of decade-long business relation between the two countries and the implementation of the recently signed MoU.”

The deal comes in the wake of Indonesia’s ascension to the presidency of the G20 or Group of Twenty, a strategic multilateral platform linking the world’s major developed and emerging economies, in December 2021. It marked a milestone for the archipelagic nation, underscoring its fast-growing capacity to provide leadership in Southeast Asia and the world.

“This agreement is a perfect warm-up for the UAE’s presence at the imminent G20 summit, which reflects the importance of collective action and inclusive collaboration among major developed countries and emerging economies around the world, which is the core purpose of the G20 under Indonesia’s Presidency. The reinsurance agreement focuses, among others, on trade and project financing for micro, small, and medium-sized enterprises, including but not limited to the health sector, sustainable energy and digital transformation,” he added.

The UAE is one of the chief guests for the 17th G20 Heads of State and Government Summit, which will occur in November 2022 in Bali, Indonesia, under the theme “Recover Together, Recover Stronger”.

For his part, Benny Waworuntu, CEO of Indonesia Re, said, “We are delighted to reinforce our partnership with ECI through this reciprocal reinsurance agreement. We’re confident that this will become a catalyst in empowering Indonesia’s commercial ties with the UAE and make a marked difference for our respective businesses by furnishing companies in both countries with ideal and innovative export credit insurance solutions.”

During the last five years, the net worth of non-oil trade between the UAE and Indonesia has surpassed AED40.4 billion. In 2020 alone, despite the challenges of the pandemic, the total value of the UAE’s non-oil trade with Indonesia stood at AED7.1 billion.

Indonesia ranked fourth in the halal food sector and third in the Muslim fashion sector by Global Islamic Economic Report.

Enjoy the best view of Eid fireworks at La Mezcaleria at Pavilion, The Beach

Jewels of Emirates Show shines with display of innovations by 20 Emirati...