FUNN unites anime community in UAE with opening of SHASHAH 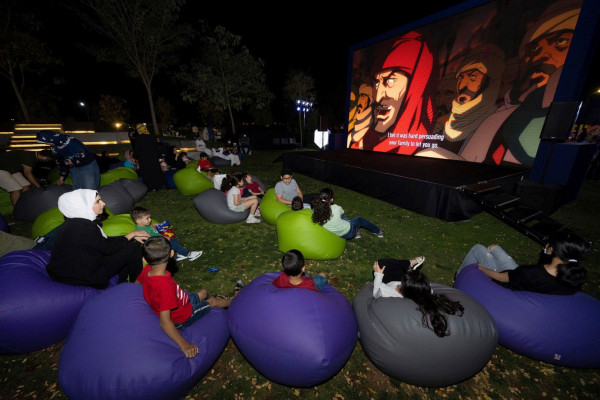 SHARJAH, 12th March, 2022 (WAM) — FUNN, a Sharjah-based organisation that promotes media arts learning among children and youth, has united passionate anime enthusiasts across Sharjah and the UAE with the opening of SHASHAH 2022, a fun extravaganza celebrating the international pop culture phenomenon at Aljada, Sharjah.

“SHASHAH represents the totality of media arts that appear on screen, be it in the medium of photography, cinema, or animation. Whether these are absorbed via television, computers, the cinema, or a mobile gadget, they all fall under the broad framework of arts,” Sheikha Jawaher said.

“This is FUNN’s first event focused exclusively on anime art, and we chose a name that embodies all aspects of this unique art form. SHASHAH thus explores the divergent art styles of anime with an array of artists and creators who will lead our children and youth into its deep and expressive world.

“SHASHAH is a wonderful platform for all arts enthusiasts to expand their creativity and imagination through our wide range of educational workshops, films, music performances, and competitions that explore the rich and fantastic universe of anime,” she added.

Young children of diverse age groups experienced the joy of learning the Japanese art of origami at a workshop led by Sahar Abdalla, a visual artist animator and art director, who introduced children to the unique art of ‘folding paper’.

Following the step-by-step instructions, children learnt to make a sailboat – an object of discovery and travel in all cultures – using a square, solid colour origami paper with just five easy folds. Crafting a whale without glue required more steps and included the addition of details like the flippers and a slit tail. The participants then decorated the paper whale with eyes and mouth. The marine theme continued with a more complex origami turtle session for young teens.

On the opening day of SHASHAH, children and youth were also introduced to the art of ‘2D Anime Sketching’ where they explored the art of sketching anime portraits, while in the ‘Creating Visual Novels’ session, participants learnt the techniques of adding visual appeal and interactivity to novels.

The ‘Colouring Manga & Anime’ session equipped young anime enthusiasts with the aesthetic skills of colouring manga characters while in the fun-filled ‘Introduction to the Chibi Style’ workshop, participants were guided on the basics of drawing adorable anime characters with large heads and small bodies.

Relaxing on comfortable green and purple bean bags in the serene surroundings of Aljada, families and children gathered to watch Kôbun Shizuno’s ‘The Journey’, produced by Manga Productions in Saudi Arabia. The movie, based on an epic tale drawn from the Arabian Peninsula and set 1,500 years ago, stole hearts on the opening day of SHASHAH.