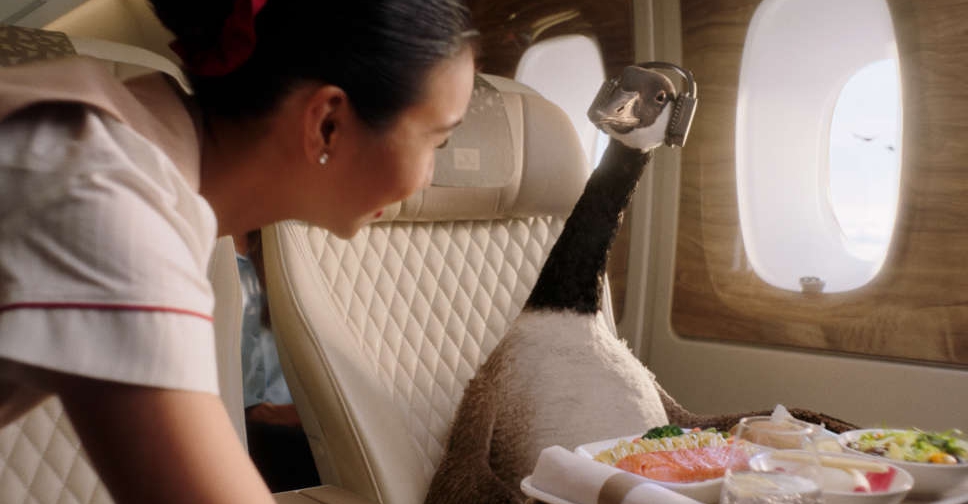 Emirates’ latest brand ambassador Gerry the Goose is inviting passengers to take a gander at the benefits and services of the world’s largest international airline, and choose to ‘Fly Better’.

From September, the global ad campaign will be in full flight across the world.

The campaign storyline follows Gerry as he ruffles feathers by deciding to Fly Better aboard a comfortable and sophisticated Emirates Premium Economy cabin, while his migrating bird-brethren are in ‘fowl humour’ after a long and tiring flight by wing.

Gerry is spotted smugly bypassing his counterparts as they fly outside the plane window, while he indulges in a delicious meal and reclines in his spacious seat to enjoy ‘The Goose, The Bad and The Ugly’ movie on his 13.3″ personal entertainment screen.

“In terms of the qualities and profile we look for in our brand ambassadors – we are spreading our wings,” said Richard Billington, SVP of Marketing & Brand at Emirates.

The airline has previously teamed up with film and TV personalities such as Jennifer Aniston, Chris Hemsworth and Jeremy Clarkson.

Meet Gerry the Goose, and take a gander at how you can fly better this winter. https://t.co/W6oE6qhUGY pic.twitter.com/53WFNjchTh

Gerry’s career began in Emirates Headquarters in Dubai, where the concept of his journey was ideated and began to take flight.

Then onto Untold Studios in London, where initial 3D models of geese were brought to life via Computer-Generated Imagery (CGI).

The CGI and filming process took 14 weeks and involved a talented team finessing every feather along with lighting and texture, while ensuring carefully created movements brought the character to life.

This included time to animate Gerry’s friends, a shoot in London to capture the nature scenes, and a shoot on board Emirates’ aircraft in Dubai.

Relatively new to the acting scene, Gerry cites his career highlight so far as being featured in the Emirates TV ad campaign. The ad will run in 25 countries for one month, starting on August 30.

Throughout filming, Gerry collaborated with British voiceover talent Michael Cronin to capture the dulcet tones of an experienced nature documentarist.

They are native to the arctic and temperate regions of North America, found during migration across the Atlantic in northern Europe.

Gerry the Goose admires the acting work of Ryan Gosling, who he says ‘gives him goose bumps’.

DGCX collaborates with FinMet to expand its product offering and participation

KSGAFAL continues initiatives to strengthen Arabic use in international organisatons