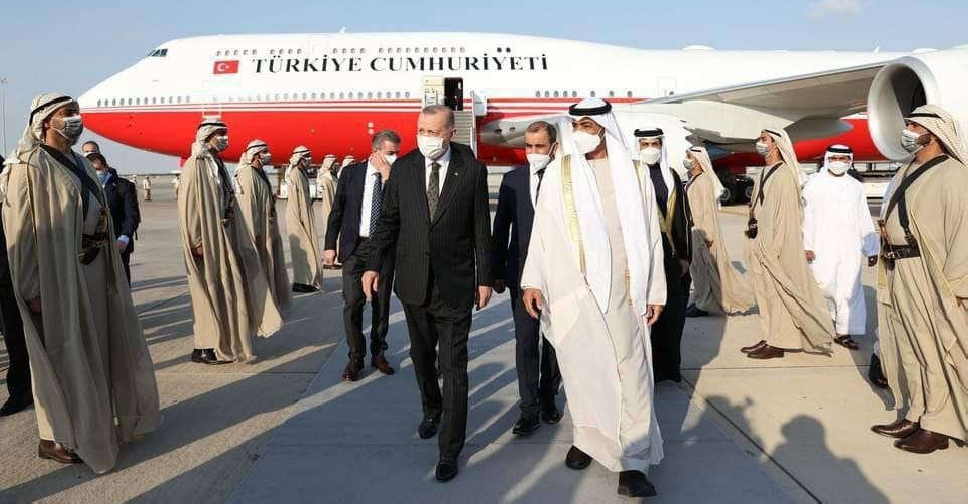 His Highness Sheikh Mohamed bin Zayed Al Nahyan, Crown Prince of Abu Dhabi and Deputy Supreme Commander of the UAE Armed Forces, and His Excellency Recep Tayyip Erdogan, President of the Republic of Turkey, have reviewed the prospects of further consolidating bilateral relations and advancing cooperation between the two nations.

His Highness Sheikh Mohamed welcomed the Turkish President and his accompanying delegation at Qasr Al Watan in Abu Dhabi and expressed hope the “significant visit would create further momentum to strengthening cooperation and building a new prosperous phase of partnerships for the higher good of the two countries, their peoples and all the nations of the region.”

His Highness and President Erdogan reviewed various cooperation opportunities available, especially in the fields of investment, development, agriculture, food security, health, technology, innovation, space projects, artificial intelligence and renewable energy, which are all being prioritised in the UAE development agenda, as well as other sectors helping to ensure sustainable development in both countries.

The two sides also exchanged views on a number of issues and developments in the Middle East, stressing they agree on the importance of supporting efforts and peaceful solutions aimed at enhancing security and stability in the region.

Sheikh Mohamed expressed his thanks and appreciation for the position adopted by Turkey and its condemnation of the recent Houthi terrorist attacks on civil sites in the UAE and its solidarity with the UAE in the face of those criminal attacks.

His Highness also pointed out that the agreements and memoranda of understanding signed by the two countries during his recent visit to Turkey laid the foundation for the launch of fresh economic and trade partnerships, highlgihting the UAE’s keenness to strengthen the partnership and double the volume of trade between the two nations.

Sheikh Mohamed noted that strengthening development ties for the benefit of the region requires cooperation between their countries, especially in light of the many similarities between the Arab and Turkish sides and the opportunities for achieving growth, cooperation and prosperity.

He also added the UAE welcomes every step on the road to understanding and peace in the region and noted the UAE’s keen to cooperate with Turkey to face the multiple common challenges witnessed in the region through dialogue, understanding, consultation and diplomatic solutions.