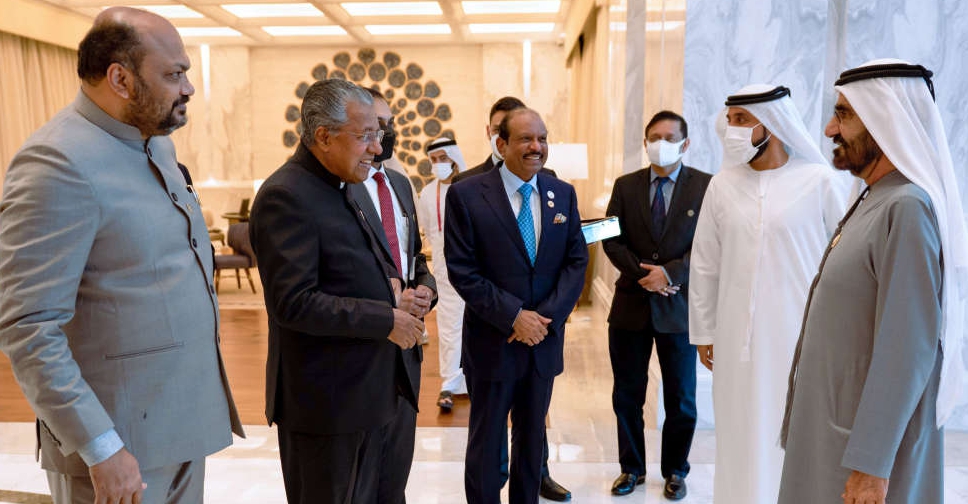 His Highness Sheikh Mohammed bin Rashid Al Maktoum, Vice President and Prime Minister of the UAE and Ruler of Dubai, today met with Pinarayi Vijayan, the Chief Minister of the Indian state of Kerala.

Welcoming the minister, Sheikh Mohammed praised the contributions of the Indian expatriate community to the UAE’s development and highlighted the growing investments the two countries are making in each other’s economies, especially in renewable energy, logistics services, air transport and food security.

His Highness affirmed the UAE’s keenness to expand economic and investment cooperation with India and further strengthen the strategic partnership.

Noting that India’s participation in Expo 2020 Dubai has enriched the event, Sheikh Mohammed said the organisation of ‘Kerala Week’ within the Indian Pavilion will showcase the state’s economic and investment potential.

The Kerala Chief Minister expressed his pride in the strong relationship the people of the state have with the UAE.

He conveyed his deep appreciation to the UAE government for ensuring the welfare of the Indian expatriate community.

Expatriates from Kerala account for a large percentage of the Indian community in the UAE.

Vijayan expressed hope that the two sides will continue to advance their cooperation in various sectors and wished the UAE leadership and people continued progress and prosperity.

The meeting was attended by His Highness Sheikh Ahmed bin Saeed Al Maktoum, President of the Dubai Civil Aviation Authority, Chairman of Dubai Airports and Chairman and Chief Executive of Emirates Airline & Group; His Highness Sheikh Mansoor bin Mohammed bin Rashid Al Maktoum; and a number of ministers and officials from both sides.

.@HHShkMohd, in presence of @MaktoumMohammed, meets with Pinarayi Vijayan, Chief Minister of the Indian state of Kerala, at @expo2020dubai.https://t.co/1yhxHByl4K pic.twitter.com/Yy9YYLUu4D

Welcoming the Kerala Chief Minister, @HHShkMohd praised the contributions of the Indian expatriate community to the #UAE’s development and highlighted the growing investments the two countries are making in each other’s economies.