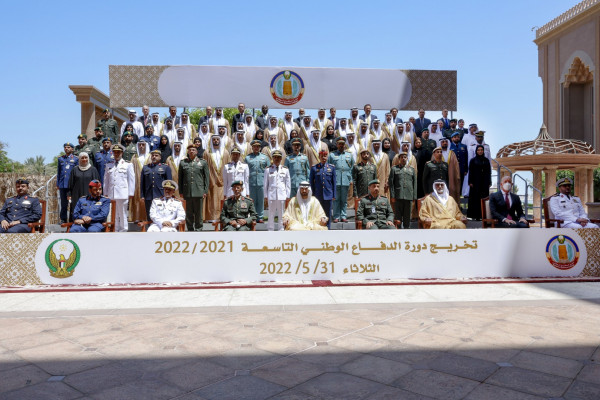 Commenting on the occasion, H.H. Sheikh Hamdan bin Mohammed said that under the guidance and support of the leadership, the National Defence College plays a key strategic role in preparing highly-qualified defence personnel who are capable of contributing to the UAE’s development journey.

Sheikh Hamdan highlighted the honorable role played by the UAE Armed Forces in safeguarding the country and creating a secure environment for enhancing the country’s growth and achievements.

Congratulating the ninth batch, H.H. invited graduates to employ their acquired knowledge and skills to assess challenges and develop strategies to support the country’s national security objectives and achieve its future vision.

During the ceremony, Major General Staff Aqab Shahin Al Ali, Commandant of the National Defence College, delivered a speech in which he praised the UAE leadership for their ongoing support of the College, which has enabled it to continue providing high-level training courses that incorporate the latest technologies. He also highlighted the College’s ability to keep pace with the leadership’s aspirations for the future, especially as the country enters a new era of development.

Maj Gen. Al Ali said that the College has provided graduates with scientific knowledge in the defence field, which will enable them to protect their nation and ensure its safety. He concluded his speech by congratulating the graduates and wishing them success in serving their country.

At the end of the ceremony, Sheikh Hamdan presented certificates to the graduates and took commemorative photos with them.