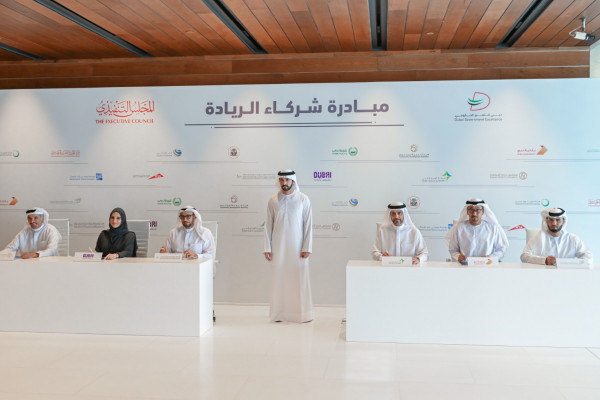 Elite government entities, such as DEWA, Dubai Police and RTA, will cooperate with other departments to facilitate the rapid exchange of knowledge and enhance public services through a whole-of-government strategic approach. A total of 14 government entities have signed partnership agreements as part of the programme, which will feature training, reporting and employee secondments.

Sheikh Hamdan said, “Dubai is a city of pioneers and government entities have a responsibility to act with speed and efficiency to realise the vision of His Highness Sheikh Mohammed bin Rashid Al Maktoum, Vice President and Prime Minister of the UAE and Ruler of Dubai. Greater harmony between all government departments will unlock new synergies that advance our shared goal of maintaining Dubai’s position as a leading global destination.”

“The launch of the ‘Partners for Pioneering’ initiative marks a new era for elite entities in the Dubai government team. It will see us go further and faster to promote close cooperation and partnership between various entities to take our performance to new heights. Real leadership requires effective partnerships, where all players advance with the same speed and efficiency towards achieving common strategic goals,” he added.

The initiative will operate under the umbrella of the Dubai Government Excellence Programme, part of the General Secretariat of The Executive Council of Dubai.

For his part, Abdulla Mohammed Al Basti, Secretary-General of The Executive Council of Dubai and Chairman of the Dubai Government Excellence Programme, said, “The ‘Partners for Pioneering’ initiative will promote teamwork and the transfer of knowledge between various government entities in line with the vision of His Highness Sheikh Mohammed bin Rashid Al Maktoum, Vice President, Prime Minister and Ruler of Dubai, and His Highness Sheikh Hamdan bin Mohammed bin Rashid Al Maktoum. Our government teams are among the best and brightest and this initiative will ensure they remain the best in the field.”

“The Dubai Government Excellence Programme plays a vital role in spearheading government work and providing effective tools to improve performance and enhance efficiency and effectiveness. The Executive Council of Dubai will closely monitor the progress of the ‘Partners for Pioneering’ initiative and ensure it achieves its objectives in accordance with the highest standards of performance,” he further said.

Dr. Hazza Al Nuaimi, General Coordinator of the Dubai Government Excellence Programme, commented, “The ‘Partners for Pioneering’ initiative comes in line with the leadership’s directives aimed at strengthening Dubai’s position as a global leader for excellence in government services systems, which is a goal that all government entities seek to achieve.”

He continued, “The initiative aims to improve the overall performance of government entities by transforming the mechanism of sharing experiences and exchanging knowledge into a daily practice that is part of the DNA of the government of Dubai and its employees. It will further enhance efficiency, productivity and consolidate team spirit and the ‘one government’ concept.”

The Dubai Government Excellence Programme places entities in one of three levels based on scores received in their evaluation: Elite Level (600-plus marks), Excellence Level (450-600) and the Basic Level (fewer than 450). Leadership Partners will be selected according to the level of excellence, evaluation scores, nature of the entity’s work, size of budget and number of employees.

The Dubai Government Excellence Programme will manage the initiative, select government entities from the Elite and Excellent categories, and link them with partner entities in the Basic Level to develop them through a two-year partnership agreement, which is extendable. Teams from participating parties have been instructed to hold meetings and create an integrated programme for self-assessment, provide training and identify priorities and opportunities for improvement. Elite entities will transfer knowledge, experiences, and success stories to those seeking to develop their performance through knowledge-sharing workshops.

Elite entities will review the details of the programme, initiatives and projects that contributed to their excellence and leadership and share them with those seeking to develop their performance through a series of seminars, meetings and field visits.

All participating entities in the Partners for Pioneering initiative will be responsible for ensuring full cooperation and providing resources for the development and continuous follow-up of work. The Dubai Government Excellence Programme will manage the initiative, general supervision, and follow-up of work progress, and adopt an integrated plan with the goals and responsibilities of distinguished entities and those seeking to develop their performance. It will also implement a clear mechanism to evaluate entities participating in the initiative over the next two years.

Minister of Energy: UAE is committed to the production ceiling in the “OPEC +” agreement

‘RRR’, ‘Avatar: The Way of Water’: How to watch Oscar-nominated movies in...