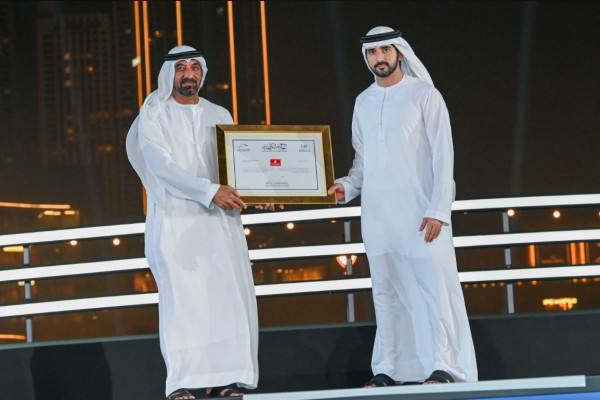 Sheikh Hamdan attended a reception held at the Burj Park, Downtown Dubai, for guests visiting Dubai from across the world to take part in the global horseracing tournament.

He said the UAE continues to bring together the world to celebrate the highest excellence in all sectors including the sporting arena and foster the international engagement needed to create a brighter future.

One of the world’s biggest horse racing tournaments, the 26th Dubai World Cup meeting is bringing together the globe’s best racehorses, trainers and jockeys. To be held on 26th March at the Meydan Racecourse, the 26th Dubai World Cup meeting offers a total prizemoney of US$30.5 million H.H. Sheikh Hamdan honoured Emirates Airline, the sponsor of the US$12 million Group 1 Dubai World Cup at the reception. H.H. Sheikh Ahmed bin Saeed Al Maktoum, Chairman of Dubai Civil Aviation Authority, Chairman of Dubai Airports and Chairman and Chief Executive of Emirates Airline and Group, received an appreciation plaque from Sheikh Hamdan on behalf of the Airline. Sheikh Rashid bin Dalmook Al Maktoum, Chairman of the Dubai Racing Club, and a number of senior officials attended the reception.

The reception for guests was held at the Burj Park, Downtown Dubai, an island overlooking the tallest building in the world, the Burj Khalifa.