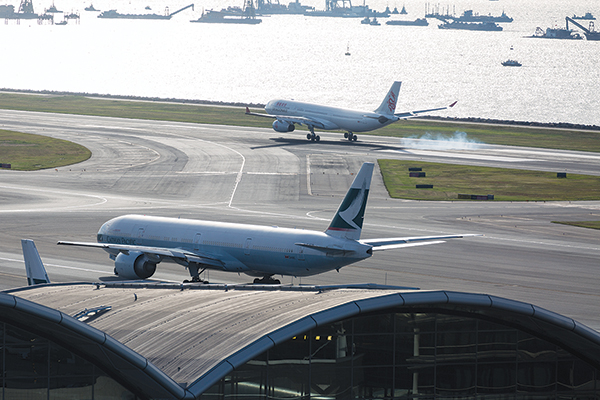 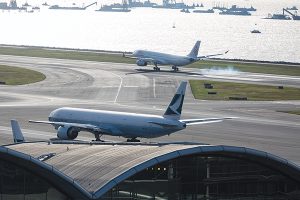 Major airlines reported a surge in bookings from Hong Kong last week as the city saw a new pandemic-era record in net population outflow, underscoring how a deepening Covid-19 crisis is pushing more residents to leave.
Emirates Airlines said it is seeing weekly double-digit growth for advanced bookings until July, particularly to the UK and other European countries, according to a spokesman in an email. A spokeswoman for Turkish Airlines Inc said in an email that it is experiencing a double-digit increase in demand month-on-month. The Istanbul-based carrier added that it is closely watching if it is “feasible” to expand its schedule.
Airlines are seeing big jumps in bookings despite the shortage of flights and logistical
difficulties of leaving Hong Kong, after authorities unveiled measures to combat the surge in Covid cases that include bringing forward school summer holidays to March and city-wide mandatory testing that could include a lockdown. Many people also fear that under the government’s rules their children could be taken into isolation and separated from their parents if they test positive.
The Asian financial hub reported 26,026 new Covid-19 cases over the weekend , including 83 deaths, as the fifth wave of the pandemic ravages the elderly, many of whom remain unvaccinated. Hong Kong recorded a fresh record net population outflow for the week ending on February 27, according to the latest data from the Hong Kong Immigration Department.
A net 21,991 people left the city last week from all ports, up 1.4% over the previous week, while the number of arrivals fell to a pandemic low as the city continues to ban flights from nine countries and almost all transit passengers.
More than 10% of European Union citizens living in Hong Kong have left the city, according to the EU Office to Hong Kong and Macao, due to the city’s harsh pandemic measures. In recent weeks, the government has also banned dining-in at restaurants at night, closed gyms and hair salons and mandated mask-wearing even in country parks.
Diplomats in Hong Kong have also communicated with citizens as more people turn to them for advice and help. The Swiss consulate said it was in contact with its national carrier and local authorities about restarting flights, in an email to Swiss citizens in Hong Kong seen by Bloomberg. The French consulate advised citizens on its Facebook page to make the appropriate decision for their families, predicting that Hong Kong would remain closed for the rest of this year.
Hong Kong saw a record outflow of 89,200 residents in 2021, leaving its population at about 7.39 million, according to government data. That maintains the 1.2% rate of population decline set at the end of 2020, the biggest drop in at least six decades. The government attributed the decline in part to fewer people coming to work and study due to strict border controls.