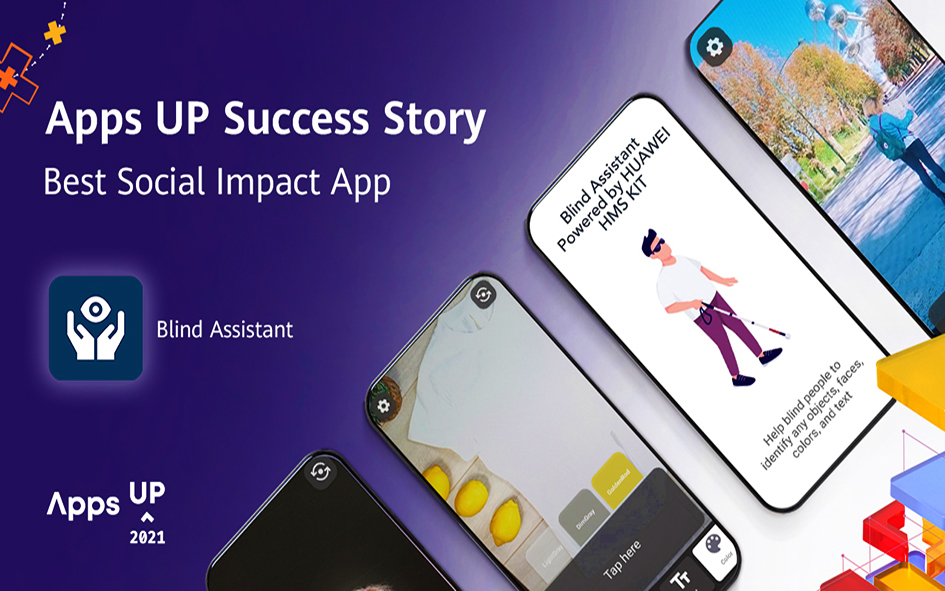 Dubai, United Arab Emirates, 29 August 2022: Blind Assistant, a mobile app developed by a team of Tunisian engineers, helps the visually impaired and blind community to recognise objects, texts and colours around them using the integrated voice-over features in the app. The tech giant introduced a ‘Best Social Impact’ category as part of the Huawei Global App Innovation Contest (Apps UP), in order to facilitate the development of experiences such as Blind Assistant that positively impact communities.

According to the World Health Organization, approximately 2.2 billion people worldwide have near or far vision impairment. The differently-abled can have lower rates of workforce participation and productivity. The app’s goal is to make visually impaired individuals more independent by assisting them in identifying objects, faces, colours, and texts with the tap of a button. A visually impaired person can use Blind Assistant to easily orient themselves, eliminating the need for a visual embossed print.

“We were inspired to work on the ‘Blind Assistant’ project once we learned about Apps UP in 2021. We worked on integrating with the HMS Ecosystem and were able to launch the app on time for the competition,” said the developers of Blind Assistant Kassis Bassem and Wajih Sakka. “Since its inception, Blind Assistant played an important role in assisting the visually impaired community by enhancing their communication abilities daily.”

“Technology can play a significant role in positively influencing the community, and we are thrilled to see how mobile apps are benefiting consumers. Huawei’s Apps UP competition acts as a catalyst for the development of creative mobile apps, and Blind Assistant – the winner of the Best Social Impact App in 2021, is a testament to that fact. The app effectively demonstrates how mobile apps can promote inclusivity in the community and serve the underserved”, said, Lu Geng, Vice President of the Middle East and Africa, Huawei Global Partnerships & Eco-Development, Huawei Consumer Business Group.

Blind Assistant, is available to download via AppGallery, the default application marketplace for Huawei smart devices. Apps UP 2022 has a cash prize pool of $230,000 for Middle Eastern and African developers, with individual prize amounts ranging from $5,000 to $15,000. Categories include the best HMS Innovation Award, Best App, Best Game, Best Social Impact App, All-Scenario Coverage Award, Tech Women’s Award, Student Innovation Award, and the newly introduced Best Arabic App. The Tech Women’s Award is open to teams with at least one female developer who is a pivotal team member or leader.

Developers can enter multiple categories and submit more than one app to boost their winning chances. To register and learn more about the Huawei Global App Innovation Contest (Apps UP), please email appsup.mea@huawei.com or visit the official Apps UP 2022 MEA page