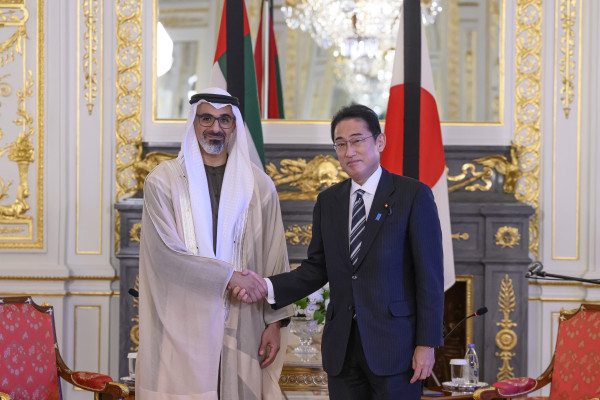 During the meeting, His Highness witnessed the launch of a strategic partnership agreement between the UAE and Japan, which was announced in 2018 during the visit of the late Japanese Prime Minister Shinzo Abe to the UAE.

The launch of the partnership coincides with the celebration of the 50th anniversary of establishing bilateral relations between the two nations, and highlights the importance of strengthening cooperation between the countries across various fields to further advance progress and development, and to strengthen social and economic growth.

The strategic partnership agreement aims to strengthen bilateral ties to serve common interests by encouraging more diplomatic, economic, political and commercial partnerships and by encouraging investment in both countries.

The key areas of the partnership include diplomacy, enhancing international development and humanitarian aid efforts, and cooperating across business, trade, energy and industry by enhancing the business environment to encourage trade and investment across technology, infrastructure, artificial intelligence, healthcare, and SMEs, as well as other high-priority sectors including agriculture, the environment, climate change solutions, education, science and technology, and defence and security.

The meeting was attended by Dr. Sultan bin Ahmed Al Jaber, Minister of Industry and Advanced Technology and UAE Special Envoy to Japan, Shehab Ahmed Al Fahim, UAE Ambassador to Japan, and a number of officials from the Ministry of Foreign Affairs and International Cooperation.

The visit reflects the depth of bilateral ties between the UAE and Japan across economic, commercial and diplomatic fields. Japan was one of the first countries to establish diplomatic ties with the UAE in 1971, culminating in the opening of the UAE Embassy in Tokyo in December 1973 and the Embassy of Japan in Abu Dhabi in April 1974.

The UAE is also Japan’s tenth largest trading partner globally, according to 2021 statistics, and Japan’s largest strategic partner in the field of energy, importing more than 20 percent of its oil from the UAE. The volume of non-oil trade between the two countries in 2021 amounted to more than AED49 billion, and continued to recover during the first half of 2022 to rise to pre-Covid-19 levels, reaching around AED25.7 billion, an increase of 2.7 percent compared with the first half of 2021.

The UAE is also home to more than 340 Japanese companies operating in various sectors, including technology, renewable energy, transportation, healthcare, infrastructure and manufacturing. The value of Japanese investments in the country has exceeded US$14 billion.