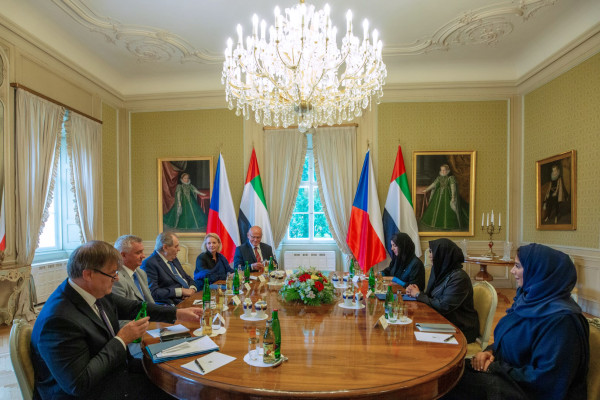 During the meeting, Sheikha Latifa underscored the strong ties between the two countries and their pioneering work in the creative sector. The meeting also explored areas of joint cooperation and opportunities to exchange cultural, design and artistic expertise.

The UAE is a multicultural and cosmopolitan nation that is constantly keen on deepening its relations with different countries and building strong partnerships across all fields, including the cultural and creative sector, she stated.

“My visit to the Czech Republic and my meeting with President Zeman falls in line with our leadership’s efforts to build an open dialogue and constructive communication with all countries, thus enhancing the position of Dubai and the UAE as a preferred destination characterised by tolerance and diversity, and strengthening our position as a global hub for arts and culture. During my meetings with Czech officials, I was briefed on the exemplary achievements of the country’s cultural sector and various cultural institutions. Sheikha Latifa also emphasised the role of cultural and knowledge exchange in enhancing the industry, adding that ICOM General Conference 2022, being held in Prague, serves as an ideal platform to introduce Emirati culture to the world,” she added.

As part of her visit to Prague as head of the UAE delegation, H.H. Sheikha Latifa took part in several meetings with officials from the Czech Republic as well as members and leaders from ICOM.

For her part, Reem Al Hashimy said the meeting falls within the framework of strengthening international cooperation in related fields. “The UAE constantly looks for opportunities to develop partnerships with the international community. Having delivered an inclusive World Exposition in Dubai a few months ago, we look forward to continuing our trajectory of collaboration with partners from all around the world to achieve the Sustainable Development Goals. The engagements held by the UAE delegation, led by H.H. Sheikha Latifa bint Mohammed, further highlight this spirit of collaboration and partnership especially as we prepare to host ICOM in Dubai in 2025.”

Jiri Slavic, Czech Republic’s Ambassador to the UAE, said, “We are so proud to have H.H. Sheikha Latifa bint Mohammed lead the UAE delegation to the 26th ICOM General Conference 2022 in Prague. Her visit represents another key milestone to the strong relations between both countries, and we look forward to many more opportunities of collaboration.”

Held under the theme “The Power of Museums”, ICOM 2022 is being organised in Prague from 20th to 28th August. The ICOM General Conference is held once every three years. The upcoming 27th edition of the conference is scheduled to be held in Dubai, making it the first city in the Middle East, North Africa, and South Asia (MENASA) region to host the prestigious global conference.