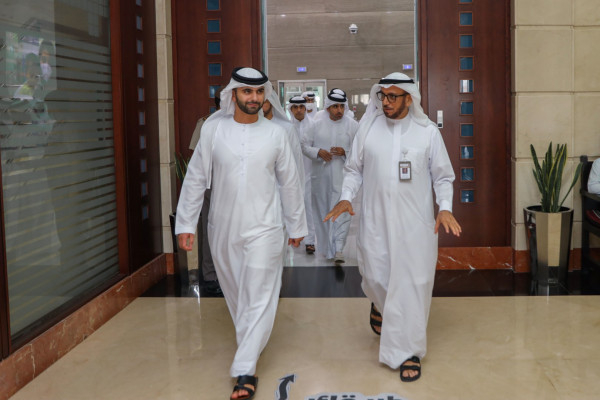 H.H. Sheikh Mansoor bin Mohammed affirmed that the Council seeks to enhance Dubai’s ability to ensure the highest security at its border crossing points. He also underscored the importance of maintaining high levels of preparedness to handle any unforeseen situation, thus contributing to the safety and security of society.

The Dubai Border Security Council’s Chairman commended the government departments and organisations represented in the Council for their efforts to promote collaboration between various local and federal agencies supervising border crossings, praising them for fostering a knowledge-sharing culture, following best practices to implement Dubai’s strategic border security plan, and contributing to raising the city’s regional and global competitiveness.

The meeting discussed several important issues and policies set by the Dubai Border Security Council in coordination with local departments and their impact on ensuring support for the economic directives of the Dubai government to achieve synergy between security and economic priorities.

The issues discussed included Maritime Assistance Initiative under the supervision of the Dubai committee established for regulating maritime activities. The meeting also touched on ways to provide logistical support and field services to government agencies in the maritime sector, such as inspections, marine navigation licensing procedures, entry and customs procedures, and ensure the optimum use of government resources to serve the public interest.

The Hydrographic Survey of the Territorial Waters of Dubai was also discussed, along with how to leverage the survey to support the operations of maritime navigation in Dubai while ensuring safety and security.

The meeting reviewed several initiatives launched by the Council, including the initiative to measure the performance of the marine sector (dashboard) under the supervision of the Maritime Regulation and Insurance Committee in the Emirate of Dubai and Dubai Digital. The dashboard will display data about Dubai’s maritime sector. The platform, to be launched at the end of July, will be finetuned to overcome any challenges. Also discussed was the ‘immediate needs initiative’ of Joint Security Centres from the Maritime Regulation and Insurance Committee.

The e-wallet initiative, through which a unified civilian entity will be established to provide marine means affiliated with Dubai Municipality and the Dubai Marine Sports Club, was also discussed.

‘The hottest investor in renewables is a big oil producer’: WSJ