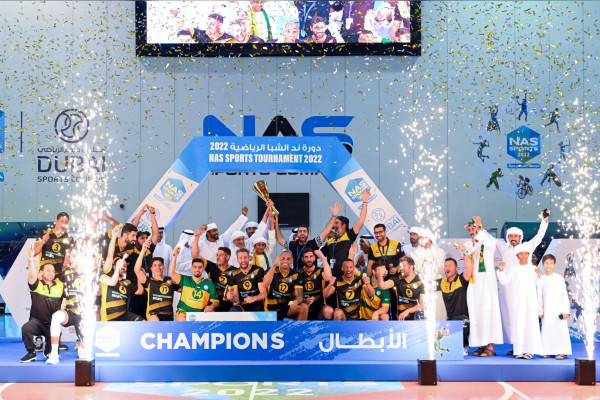 Held under the patronage of H.H. Sheikh Hamdan bin Mohammed bin Rashid Al Maktoum, Crown Prince of Dubai and Chairman of Dubai Executive Council, and organised by the Dubai Sports Council, the NAS Sports Tournament has been one of the top sporting events held during the Holy Month of Ramadan since 2013. His Highness Sheikh Mansoor bin Mohammed attended the final day of the largest sports tournament of its kind in the country.

Sheikh Mansoor congratulated the Emperor team on winning the volleyball title at the Tournament. He also praised Al Jawareh, who finished as runners-up in the contest that saw a high level of competition and high-octane matches. The Tournament saw leading players joining amateurs and professionals to battle for top honours in various sporting disciplines .

Sheikh Mansoor said, “The Nad Al Sheba Sports Tournament continues to achieve the sporting and social goals set by H.H. Sheikh Hamdan bin Mohammed bin Rashid Al Maktoum, Crown Prince of Dubai and Chairman of Dubai Executive Council. In line with the vision of His Highness, Dubai Sports Council strives to ensure that the participation remains open to everyone, from amateurs to professionals of various age groups and nationalities, providing opportunities for everyone.”

“The NAS Sports Tournament reflects the priority Dubai places on promoting community engagement and building strong social bonds through sports. Dubai Sports Council’s efforts enabled more than 5,000 amateur and professional athletes to participate in the ninth edition of the NAS Sports Tournament. The large attendance of sports lovers and their strong engagement with the players helped foster high levels of competition. While the event featured intense sporting contests, we believe everyone who participated in the Tournament is a winner,” he added.

Sheikh Mansoor also honoured the sponsors in the presence of Saeed Hareb, Secretary-General of the Dubai Sports Council and Chairman of the Organising Committee for the session.

Moreover, Sheikh Mansoor honoured the international referees of the match, including Ismail Ibrahim, Muhammad Al Dawla, and Ali Hamid. Sheikh Mansoor bin Mohammed also honoured the players who won individual titles. Those who received the awards included Majid Khamis Al-Mazmi from the Fahud Zabeel team, who won the title of best Emirati player, and Lislon Costa from the Al Jawareh team, who won the award for best defender.

The Emperor team won the final volleyball match, prevailing over Al Jaraweh 25-22, 25-20, 25-15. The competition witnessed the participation of 150 players from 20 different nationalities.

The final match brought the curtains down on the ninth edition of the Nas Al Sheba Sports Tournament 2022.