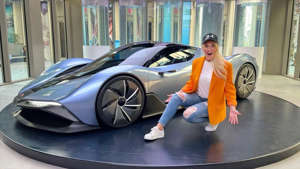 What is the future of supercars? Well, if we have anything to say about it, we hope they look like the new Matador MH2 Hydrogen Supercar. This innovative new supercar concept is currently being showcased at the Slovakian Expo Pavilion in Dubai where onlookers can see this innovative new car in the flesh. The Matador MH2 is Slovakia’s first Hydrogen powered car, which represents a massive step forward in car design.

In today’s continually shifting world of automotive powerplants, car companies are left with three choices. First, they can stick to traditional internal combustion vehicles to celebrate the end of an era, they can turn to electrification, or they can take up the unique world of hydrogen-powered cars. Sure, new hybrids and EVs get most of the headlines, but could hydrogen power cars really be our future?

Matador group certainly thinks so, and their sensational MH2 concept car is a fantastic showcase of both the brand’s technical skillset and commitment to this alternative fuel source. The Matador MH2 is powered by a unique hydrogen propulsion system developed by Slovak University TUKE. Matador claims 600 horsepower (450 Kilowatts) a top speed of 155mph (250 km/h), and a 0 to 60mph time of only 3.9 seconds, all with zero emissions.

This impressive green drivetrain delivers competitive performance while also giving customers a zero-emissions vehicle that doesn’t rely on a charging network like an EV. In fact, with the proper infrastructure, Matador MH2 owners could fill their tanks with hydrogen just as quickly as a normal stop for gas in an internal combustion vehicle. This innovative fuel source solves many problems associated with both EVs and fossil fuel-powered vehicles.

Matador Group started out life in 1905 as one of the world’s first automotive tire suppliers. Matador focused on the production and development of tires until 2007 when it divested from its tire division in a joint venture with Continental. With freed up capital Matador went on to develop into one of Europe’s largest Tier 1 automotive parts suppliers thanks to a joint venture with Auffer Design. Today Matador Group is channeling all of its experience into its vision of the future with the MH2 concept, which is the start of something very special from this Slovakia-based organization.