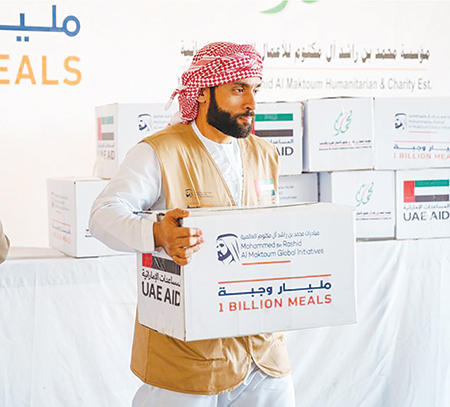 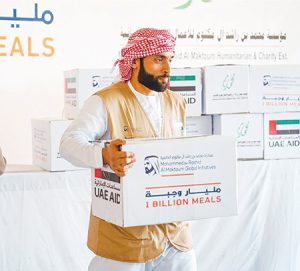 The Mohammed bin Rashid Al Maktoum Humanitarian & Charity Establishment (MBRCH) has increased its donation to the 1 Billion Meals initiative, the region’s largest campaign for providing food support to the disadvantaged and underprivileged in 50 nations around the world, to AED31 million.
They contributed an additional AED11 million on top of the AED20 million they initially donated at the launch of the initiative.
At the time of the initiative’s launch, Mohammed bin Rashid Al Maktoum Humanitarian & Charity Establishment was the first benefactor. It is going to utilise its advanced field and logistical experience and network, taking on full responsibility for the distribution operations of the meals that its donation provides, especially in the Asian and African continents.
Ibrahim Bumelha, Advisor to His Highness Sheikh Mohammed Bin Rashid Al Maktoum for Cultural and Humanitarian Affairs and the Vice-Chairman of the Board of Trustees of MBRCH, emphasised that MBRCH reflects the vision of His Highness Sheikh Mohammed bin Rashid Al Maktoum, Vice President and Prime Minister of the UAE and Ruler of Dubai, to sustain humanitarian work and expand its impact as much as possible.
MBRCH is boosting its contribution to the 1 Billion Meals initiative in response to the increased social movement from individuals and institutions and the high engagement that led to greater donations.
He said: “The 1 Billion Meals initiative provides food security to the undernourished and underprivileged around the world, particularly vulnerable groups, such as children, refugees and internally displaced victims of crises and natural disasters. It is another step on a long road of humanitarian and charity work by the UAE’s community.”
He noted that the Mohammed bin Rashid Al Maktoum Humanitarian and Charity Establishment will spare no effort or resource to reach the less fortunate wherever they may be.
MBRCH is also an operational partner of the 1 Billion Meals initiative, responsible for meal distribution in beneficiary countries it already operates in, especially in Asia and Africa, in coordination with local charities and official organisations.
Donors can contribute to the 1 Billion Meals initiative through the following donation channels – the campaign’s official website: https://ddei5-0-ctp.trendmicro.com:443/wis/clicktime/v1/query?url=www.1billionmeals.ae&umid=A53DEEC7-DD64-7C05-897F-3AE869C7CA59&auth=d95b31bf228f812d834cf2cf03f5e34fa7215184-f79710cd59ace44c8afcee60bffd7ea952896eff; bank transfer to the campaign’s account at Emirates NBD, number: AE300260001015333439802.
Donors can also opt to donate AED1 a day through a monthly subscription by sending “Meal” or “وجبة” via SMS to 1020 on the du network or 1110 on the Etisalat network.
Donations can also be made through campaign’s call center via a toll-free number 8009999.