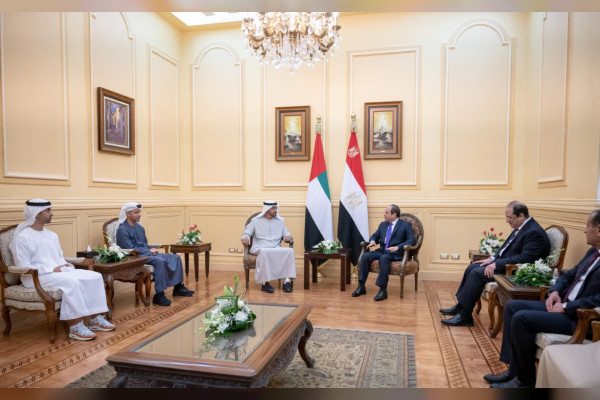 SHARM EL SHEIKH,EGYPT, 21st March, 2022 (WAM) — His Highness Sheikh Mohamed bin Zayed Al Nahyan, Crown Prince of Abu Dhabi and Deputy Supreme Commander of the Armed Forces, and President of Egypt, Abdel Fattah El-Sisi, today deliberated the prospects of further advancing cooperation across all fronts for the benefit of the two countries and their peoples.

During a meeting in the Egyptian city of Sharm El-Sheikh, where Sheikh Mohamed arrived earlier today, the two leaders reviewed issues of interest, and the latest developments on the regional and international scene. They affirmed the importance of strengthening Arab solidarity in the face of common challenges, with Sheikh Mohamed commending the privileged relations between the two nations.

“Egypt is a cornerstone of Arab security and its pivotal role and efforts are well appreciated,” Sheikh Mohamed said, pointing to the UAE’s keenness to maintain constant channels of cooperation between the two nations to promote their common interests and achieves stability, security and peace in the region. He expressed his sincere thanks to the Egyptian President for the warm reception and hospitality he received during the visit.

For his part, President Abdel-Fattah El-Sisi welcomed Sheikh Mohamed’s visit, expressing his pride in the longstanding relations between the UAE and Egypt and the joint action that unites them in facing the challenges besetting regional stability and security.

He also affirmed Egypt’s keenness to strengthen relations with the UAE in various fields, and underlined the importance of increasing bilateral meetings to ensure constant coordination over the rapid developments witnessed by the region and the world.

At the end of the meeting, the they reaffirmed the common vision shared by the two countries regarding many files and issues of interest. They stressed on the need to continue enhancing Emirati-Egyptian cooperation and coordination for consolidating joint Arab action, with Al-Sisi stressing in this context Egypt’s unshakable commitment toward the security of the Gulf and its rejection of any attempts to destabilise it.