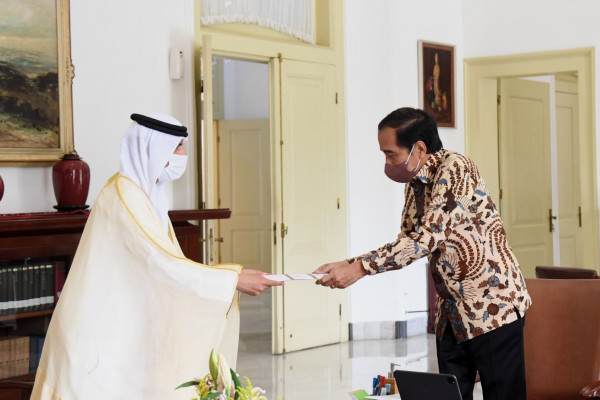 This came in a written message delivered by Suhail bin Mohammed Al Mazrouei, Minister of Energy and Infrastructure, to the Indonesian President, at the Bogor Presidential Palace, as part of the former’s official visit to the Asian nation, during which he is leading a delegation comprising representatives from G42, an Abu Dhabi-based AI and cloud computing company, Abu Dhabi Ports, Abu Dhabi Growth Fund, Abu Dhabi Future Energy Company (Masdar) and a number of officials from the Ministry of Energy and Infrastructure and other relevant departments.

For his part, the Indonesian President welcomed the Minister of Energy and Infrastructure and conveyed his greetings to the UAE leaders.

During the meeting, the Minister of Energy and Infrastructure emphasised the depth and width of the fraternal relations between the two nations and their strategic partnership as well as the keenness of the UAE leadership to develop and strengthen cooperation across all fronts.

Al Mazrouei thanked the Indonesian side for inviting the United Arab Emirates to attend the G20 Summit, which will be held in Indonesia in 2022.

For his part, the Indonesian President commended the privileged relations between the two countries and the developmental drive championed by the UAE over the past fifty years, hailing the rapid and steady growth in their bilateral relations in various fields and sectors. He expressed his hope that this visit would contribute to further strengthening cooperation in various fields.

The Minister of Energy was accompanied by Abdullah Salem Al Dhaheri, UAE Ambassador to Indonesia and the Association of Southeast Asian Nations (ASEAN), and a number of officials, during the meeting.

The Emirati-Indonesian relations have significantly grown over the past years, especially following the visit by His Highness Sheikh Mohamed bin Zayed to the Asian nation in July 2019, which resulted in the signing of memoranda of understanding worth $32 billion.

Official visits by representatives from the two countries then followed to strengthen their bilateral relations and translate the common willingness of their leadership to advance cooperation to new heights.

A number of Emirati companies are currently working on promising projects, including Indonesia’s first floating solar power plant by Masdar, and a project between the Abu Dhabi National Oil Company (ADNOC) and Indonesia’s Pertamina to develop petrochemicals and gas.