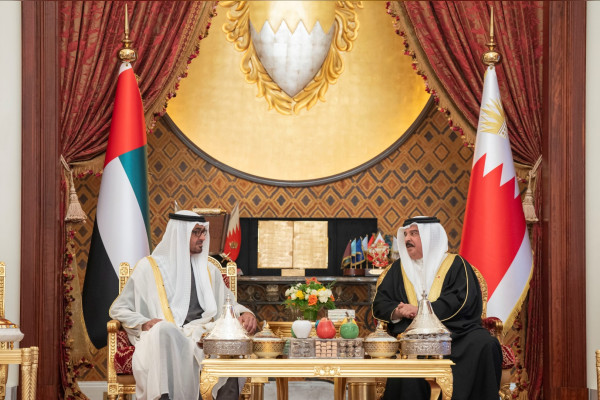 During the meeting, which took place at the Sakhir Palace in Bahrain, King of Bahrain welcomed His Highness Sheikh Mohammed, wishing him continued good health and wellbeing and further development and prosperity for the UAE and its people.

The two leaders exchanged Ramadan greetings, praying to Allah Almighty to perpetuate prosperity, goodness and stability for the peoples of the Arab and Islamic nations and the world at large.

They exchanged cordial talk about the long-standing relations that unite the UAE and the Kingdom of Bahrain and their common will to expand their common interests and fulfill their peoples’ aspirations for further progress and development. They also discussed a number of Gulf and Arab issues and exchanged views on the latest regional and global developments.

His Highness Sheikh Mohammed stressed the depth and width of the relations between the two countries, their leaders and their brotherly peoples, and their common desire to continue strengthening and developing them in various fields thanks to the support of President His Highness Sheikh Khalifa bin Zayed Al Nahyan and King Hamad.

The King of Bahrain took pride in the strong fraternal relations binding the Kingdom of Bahrain and the United Arab Emirates, as reflected in their joint stances towards different issues, following in the steps of the founding fathers. He hailed the UAE’s unwavering support to Bahrain and its people at different stages and at all levels.

The two leaders stressed the importance of further developing trade and investment cooperation, underlining the necessity of building on the achievements and expanding cooperation between the private sectors in both countries in vital sectors.

They also stressed the importance of exploring opportunities to develop joint cooperation in the fields of technology, science, energy, renewable energy, environment, health and education to meet their common aspirations and goals. They affirmed support for joint Gulf action to confront various current challenges, based on the unity of history, goals and common destiny in order to achieve progress and prosperity for the citizens of the GCC countries.

They also underlined the importance of consolidating Arab unity and concerted efforts to achieve Arab solidarity and enhance joint Arab action to meet the aspirations of Arab peoples to achieve security, stability and prosperity.

His Highness Sheikh Nasser bin Hamad bin Isa Al Khalifa, National Security Adviser and Representative of His Majesty the King for Humanitarian Works and Youth Affairs, recited a poem on this occasion.

Sheikh Mohamed arrived earlier today at Sakhir Air Base Airport, where he was welcomed by King Hamad, Prince Salman bin Hamad Al Khalifa, Crown Prince and Prime Minister of Bahrain, a number of Sheikhs, and Sheikh Khalid bin Abdullah bin Ali bin Hamad Al Khalifa, Bahrain’s Ambassador to the UAE, where an official reception ceremony was held for His Highness, during which the national anthems of both UAE and of Bahrain were played, and guards of honour lined up to salute him.

Sheikh Mohamed later left Bahrain and was seen off at Sakhir Base Airport by King Hamad.