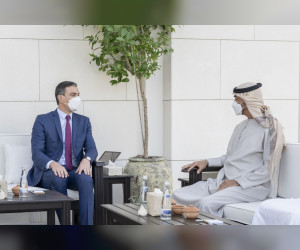 The two sides deliberated the prospects of further promoting the two countries’ mutual interests and their partnerships across various fronts.

They also reviewed a number of regional and international issues and developments of common concern and exchanged views on a number of topics of interest. In this context, they affirmed their common keenness to advance peace, stability and development efforts in the Middle East for the benefit and prosperity of their peoples.

The meeting touched on the now-running Expo 2020 Dubai and Spain’s participation in the world’s greatest show, through which the Kingdom evokes various angles of its ancient civilization and features of its links with Arab and Islamic civilization, in addition to a collection of innovations and ideas that embody Spain’s plans to building a sustainable future.

His Highness Sheikh Mohamed bin Zayed expressed his thanks and appreciation to the Spanish Prime Minister for his country’s stance towards the recent terrorist attacks on civil facilities and sites in the UAE and its solidarity with the Emirates.

For his part, Sanchez stressed that his country is keen to develop its cooperation with the UAE in all vital areas of mutual interest and to contribute to achieving stability and development for all peoples of the region.

He renewed his country’s condemnation of the terrorist attacks that targeted civil sites and facilities in the UAE, noting that they represent a serious threat to regional peace and security and violate all international norms and laws. He expressed Spain’s solidarity with the UAE and its support for all that it takes to preserve its security and territorial integrity.