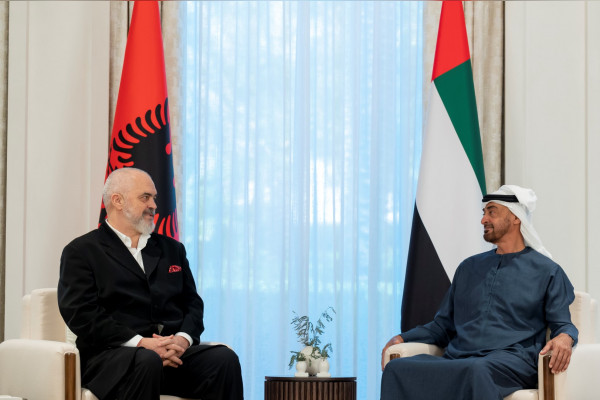 His Highness Sheikh Mohamed bin Zayed welcomed Rama and expressed the hope that the visit would contribute towards advancing joint, effective cooperation and action in various fields.

The meeting, which took place at Al Shati Palace, discussed strengthening ties of friendship and cooperation between the two countries across vital economic, investment and developmental sectors.

His Highness Sheikh Mohamed and the Albanian Prime Minister also exchanged views on the latest developments on the regional and international arenas of common interest.

His Highness Sheikh Mohamed stressed the UAE’s keenness to expand the base of its cooperation with friendly countries, which is based on the principles of mutual trust and respect and joint cooperation, expressing his happiness at the level of relations with the Republic of Albania.

The Albanian Prime Minister expressed his happiness at visiting the UAE and meeting His Highness Sheikh Mohamed, expressing his thanks for the reception and the generous hospitality. He valued the continuous support provided by the UAE to his country, especially during the COVID-19 pandemic.