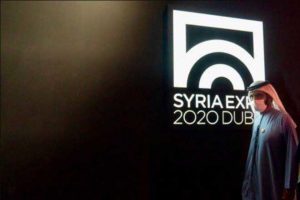 During the visit, Sheikh Al Maktoum was acquainted with some of the works of elite Syrian artists and was briefed on the features displayed by the pavilion highlighting the ancient history of Syria, from which the first alphabet and music notation and the first poem from the Kingdom of Ugarit, which flourished on the Syrian coast, were launched.

Al Maktoum listened to an explanation from the pavilion’s supervisors about one of the most important exhibits it contains, a replica of the first written alphabet discovered in Ugarit, dating back to about 1400 BC, which is the oldest documented alphabet in history.

Al Maktoum was also briefed on the important aspects of the rich Syrian civilization that was home to the world’s first agriculture on the banks of the Euphrates River and in southern Syria, where it possesses more than 3,200 types of plants and produces more than 150 types of agricultural food products.