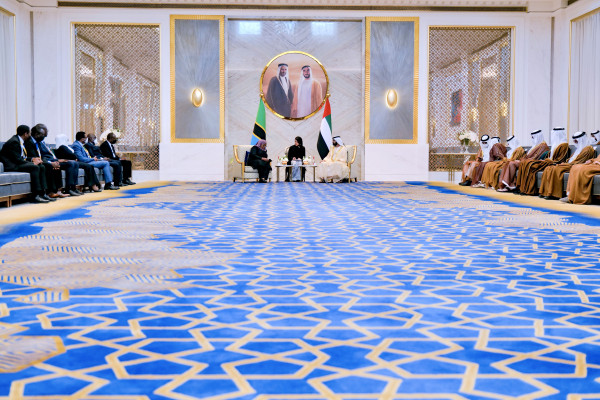 Welcoming the President and her accompanying delegation at Expo 2020 Dubai, H.H. Sheikh Mohammed bin Rashid highlighted the strong bilateral relations between the two countries and their shared desire to
continue enhancing cooperation across various vital fields in the next phase, in light of their common vision on a range of regional and global issues.

The President of Tanzania expressed her country’s keenness to take bilateral relations to greater heights and enhance partnerships in various vital sectors to further the mutual interests of both nations.

President Samia Suluhu Hassan also praised the UAE’s remarkable development journey under the leadership of President His Highness Sheikh Khalifa bin Zayed Al Nahyan, as well as the country’s various achievements, which reflect the leadership’s ambitious vision for the future.

The President of Tanzania also congratulated the UAE on the successful hosting of Expo 2020 Dubai, which is being held for the first time in the Middle East, Africa and South Asia region. The mega event brings together people from across the world to discuss ways to create a more prosperous future for humanity, she said.

Sheikh Mohammed and the President of Tanzania also attended the signing of a Memorandum of Understanding (MoU) on political consultations with the Ministry of Foreign Affairs and International Cooperation.