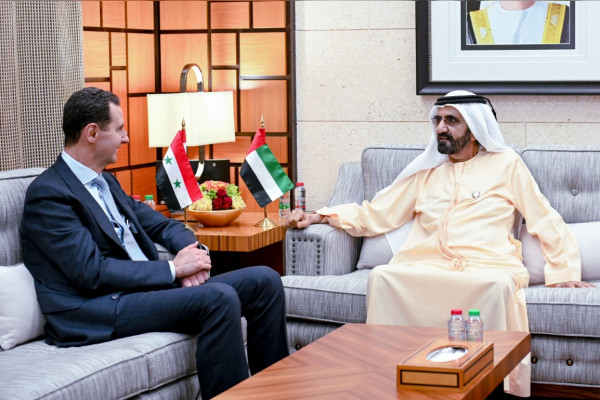 During the meeting, His Highness Sheikh Mohammed bin Rashid welcomed the visit of President Bashar and his accompanying delegation, which comes within the framework of the brotherly relations between the two countries.

His Highness expressed his sincere wishes for peace, security, stability and prosperity to prevail in Syria and the entire region, The meeting dealt with the overall relations between the two countries and the prospects of expanding cooperation in a way that fulfils the aspirations of the two brotherly peoples, achieves their comprehensive development goals, and enhances the chances of peace and stability in Syria and the region in general.

The two sides also reviewed the current situation in Syria, as well as various developments on the Arab and international scene, and all topics of common interest.

His Highness Sheikh Mohammed bin Rashid affirmed the UAE’s keenness to discover new paths of constructive cooperation with Syria, and to monitor opportunities to advance this cooperation for the common interests of the two brotherly peoples.

The meeting was also attended by the delegation accompanying the Syrian President, including Dr. Faisal Mekdad, Minister of Foreign Affairs and Expatriates, and a number of officials.