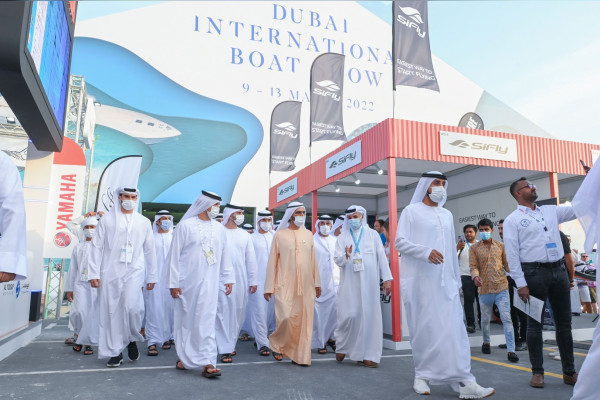 Sheikh Mohammed bin Rashid said: “The country’s rich seafaring heritage and historical strengths combined with the vision of our founding fathers have inspired the development of a world-class maritime infrastructure. This infrastructure has driven many world-class projects and led to the nation becoming a leading player in various global sectors including trade,
tourism, leisure and hospitality.

The organisation of one of the world’s most influential yacht shows is another example of our determination to build Dubai into a global maritime destination and become a hub for excellence in various sectors. Dubai today is a global yacht capital and a preferred destination for yacht owners, charters and cruise travelers from across the world.”

The 28th edition of the Middle East’s nautical showpiece, which is featuring more than 800 brands, has been lauded for its positive impact on the global maritime sector and reuniting the industry after a sustained period apart. It is demonstrating Dubai Harbour’s capabilities as a dedicated superyacht marina and is strengthening Dubai’s global reputation as a world-class maritime destination.

His Highness and his fellow dignitaries visited Gulf Craft, who marked the event’s opening day by launching two new yachts.

Running from 9th-13th March, the Dubai International Boat Show is hosting exhibitors from more than 54 countries.

Aggressive promotions ahead of ‘RRR’ release

UAE citizens to be exempt from UK entry visa