Museum-goers transport into the future with Barco 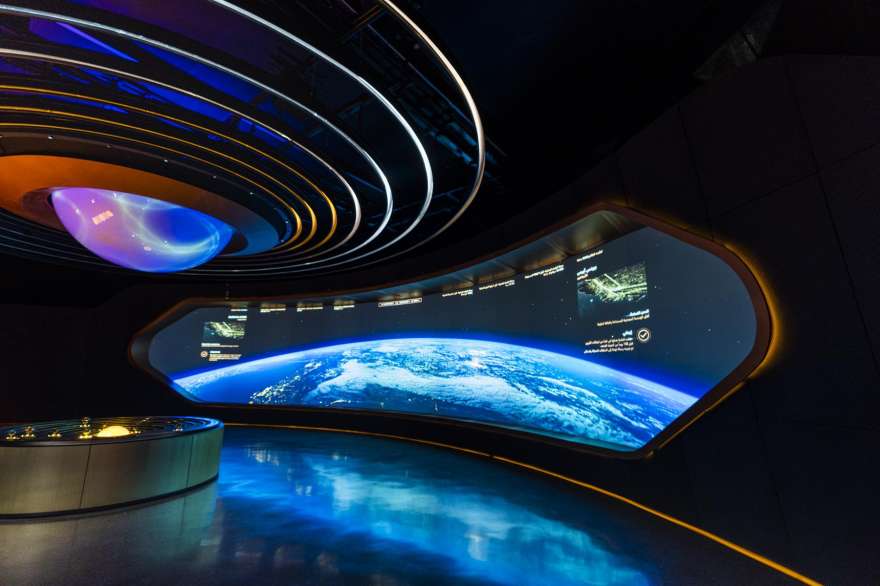 Back in 2014, the Dubai Government organised a summit with small temporary exhibits in which it shared ambitions, visions and a roadmap for the future. Now, the growing initiative is a permanent installation known as the Museum of the Future. The new landmark exhibition space, which opened in February of this year, offers visitors a look into the future, incorporating elements of traditional exhibitions, immersive theatres and themed attractions exploring the predicted evolution of society, science and technology. The ever-changing exhibition space is crafted by visionary designers, artists, engineers and technology experts.

The museum founders called on Atelier Brückner, a company that specialises in museum concept development and exhibition design, to help bring the attraction to life. Together with AV consultant, medienprojekt p2, it reached out to Barco to collaborate on the project. With architectural challenges and unique requests, Barco engineers customised its technology accordingly.

One of the main exhibits focuses on what life could be like inside a space station – named OSS H.O.P.E – in 2071. The room has metal walls designed to look like a spacecraft, with screens acting as windows to show the views during lift-off. 14 Barco F90-4K13 projectors with an UST lens are installed in the shallow space behind the screens, providing 110 megapixels on a 21m x 4m curved Rigiflex screen – said to be the largest curved rear-projection screen in a single piece ever built.

“Our engineering team went all out for this project,” said Kris Wullaert, product manager at Barco. “Together with the customer, we invested time and resources in customised engineering, pushing the limits of our existing manufacturing equipment, to realise the unthinkable.”

The exhibit also features three F70 projectors creating an image inside an inversed dome and two F80s projecting onto a robotic interactive table. The HEAL Institute has ten UDM projectors reflecting a digital version of the Amazon rainforest, and the Al Waha exhibition features four UDM-4K22 and four G60 projectors providing visitors with a visual spa experience. External coolers made for an almost silent performance, befitting the meditative feel of the attractions. Finally, a free-standing 5 x 5 UniSee video wall is used on the exhibition floor to inform visitors with details on the technologies used.

Phil Marlowe, AVI-SPL managing director, Middle East, concluded: “The Barco technology portfolio is world-class to begin with, but we needed a solution. Barco engineering stepped in and stopped at nothing to ensure perfection. From custom one-of-one solutions to the deployment of on-site professional services, the Barco team thought outside the box every step of the way. Barco became an extension of the AVI-SPL team and we are very pleased with the results the team achieved.”