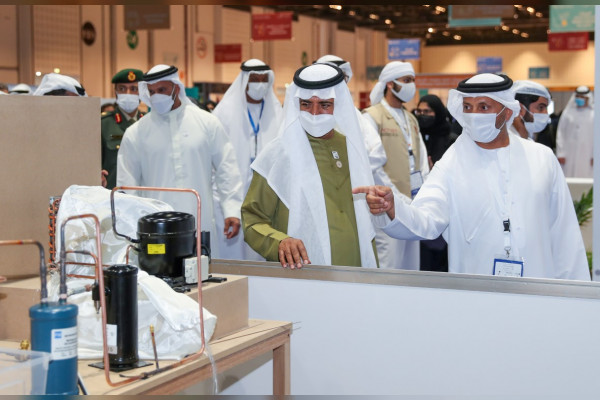 ABU DHABI, 8th March, 2022 (WAM) — Sheikh Nahyan bin Mubarak Al Nahyan, Minister of Tolerance and Coexistence, today inaugurated the 13th edition of the EmiratesSkills National Competition and the WorldSkills competition held on the sidelines of the event, under the patronage of H.H. Sheikha Fatima bint Mubarak, Chairwoman of the General Women’s Union (GWU), President of the Supreme Council for Motherhood and Childhood, and Supreme Chairwoman of the Family Development Foundation (FDF).

The competition is being hosted by the Abu Dhabi Centre for Technical and Vocational Education and Training (ACTVET) at the Abu Dhabi National Exhibition Centre (ADNEC), with the participation of 166 citizens.

The attendants of the inauguration explored the pavilions of the National Competition and WorldSkills competition, lauding the distinguished competitiveness levels shown by citizens who are taking part in 24 engineering and technical categories.

They also commended ACTVET’s success in attracting a wide range of government institutions to participate in both events, including the Ministry of Education, the Khalifa University of Science, Technology and Research, the Institute of Applied Technology, Abu Dhabi Polytechnic, the Fatima College of Health Sciences, and other leading national universities and educational institutions.

Sheikh Nahyan said that, through their participation, Emirati youth are showcasing high levels of innovation that embody the vision of the UAE’s leadership to prepare young generations for future professions and supply them with modern-day skills and knowledge, enabling them to compete in the labour market.

Dr. Maitha Al Shamsi said the current edition of the competition is especially distinctive because the WorldSkills competition will be held on its sidelines, underscoring the success of its previous 12 editions in developing the skills of the Emirati youth.

Hussain Al Hamdi noted that the competitions contribute to preparing students for the future and developing their creative skills from a young age.

Ali Mohammed Al Marzouqi, Chairman of EmiratesSkills, said the competition would conclude tomorrow, with the winners to be announced on Thursday, 10th March, at ADNEC.