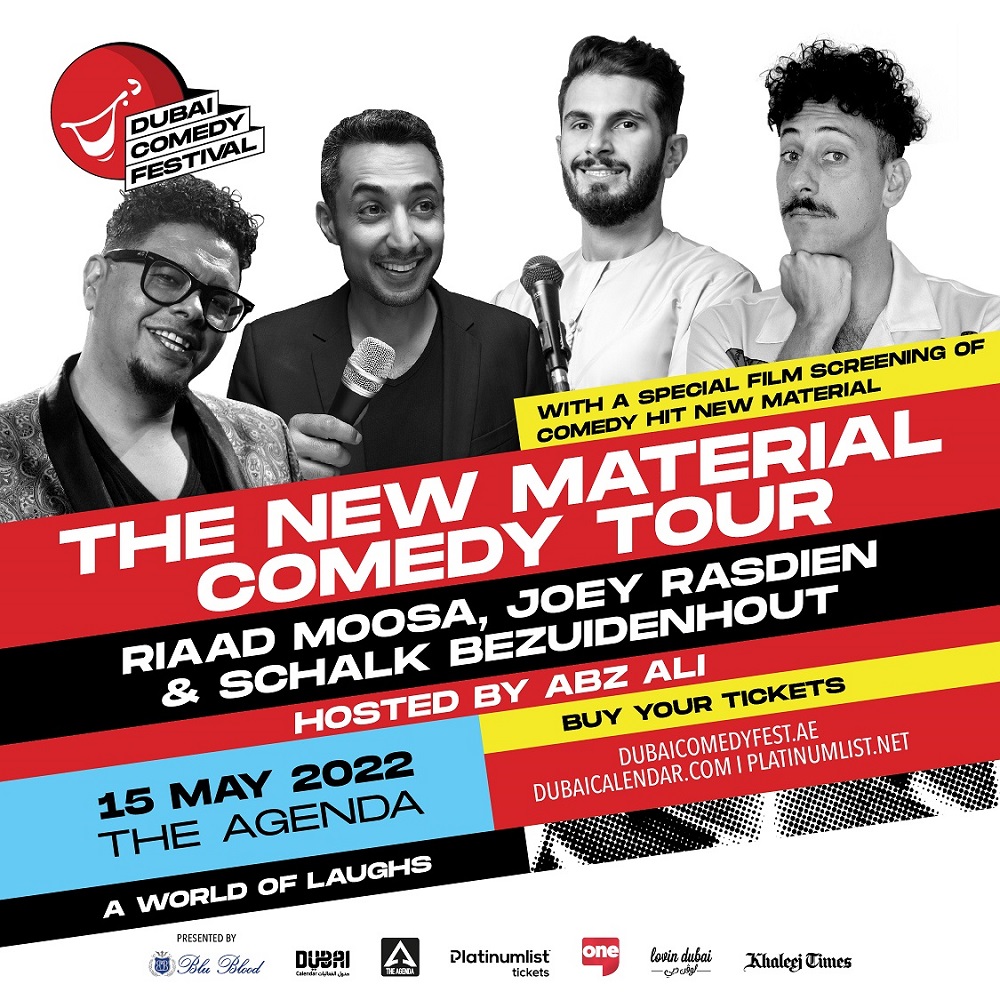 Dubai – It’s an age old saying that laughter is the best medicine.  For one-night-only, this May 15th at The Agenda in Dubai, that’s exactly what the doctor has ordered as South Africa’s leading funny-men, Dr Riaad Moosa, Joey Rasdien and Schalk Bezuidenhout harness the powerful benefits of laughter when they bring the unique comedy experience of ‘The New Material Comedy Tour’ – a live stand-up show coupled with an exclusive film screening – to the Dubai Comedy Festival.

Following the 2021 release of New Material, a hilarious and heart-warming film about a dutiful young Muslim man who moonlights as a stand-up comedian in Johannesburg, South Africa, the formidable comedy trio have teamed up again.  With this royal flush of comedy heavyweights, this is guaranteed to be a top-notch night of entertainment showcasing not only the very best in homegrown South African stand-up talent but patrons will also be treated to a special ‘Comedians Cut’ screening of the film as well.

As an award-winning comedian, actor, writer and presenter, Riaad Moosa is one of South Africa’s most popular and acclaimed comedians – and he happens to be a qualified medical doctor too.  He certainly seems to have the remedy for nation’s ills – a healthy dose of laughter, straight up – and hold the aspirin.

Joey Rasdien’s endearing stage persona is intellectually absurd, physically hysterical and thought-provoking.  He not only makes you laugh, but makes you think as well.

Schalk Bezuidenhout is instantly recognisable – you can’t miss his signature jerseys, hair and moustache.  As one of the most exciting voices in South African comedy, he brings his unique upbringing and daily life experiences to the comedy stage.

‘The New Material Comedy Show’ is hosted by local comedian, Abz Ali and is rated PG-10 and suitable for the family. Tickets are available from PlatinumList and Dubai Calendar.

Another world-class production proudly brought to you by Blu Blood.

UAE reaffirms solidarity with Palestinian people for restoring their alienable rights to...