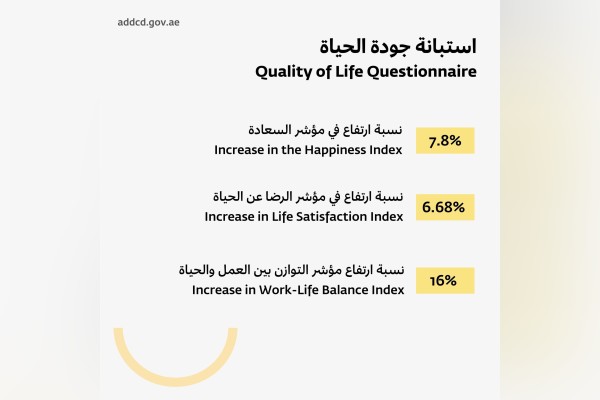 ABU DHABI, 20th March, 2022 (WAM) — The Department of Community Development (DCD) in Abu Dhabi has announced that the quality of life indicators in the emirate show increased happiness and satisfaction rates.

This was announced on a day that coincides with International Day of Happiness, on 20th March, and is considered one of the most important days declared by the United Nations General Assembly (UNGA) recognising the importance of happiness as a key driver of the community, economy, and sustainable development.

Dr. Mugheer Khamis Al Khaili, Chairman of the DCD, stated that caring for the community and enhancing the lifestyle leads to a better quality of life and happiness. He stated that happiness should be considered one of the main factors for society’s well-being, in addition to socio-economic indicators.

Al Khaili added that the UAE and its wise leadership strives to solidify the concept of happiness and social well-being in citizens and residents. This has led the UAE to become one of the most prominent countries in achieving the highest levels of satisfaction and happiness. The DCD conducts periodic studies and annual surveys to identify society’s needs and ambitions and boost development in line with the department’s vision to achieve a dignified life for all community members.

The UAE maintained its highest ranking among Arab countries for the 7th consecutive year in the World Happiness Report 2021. It is also continuing its global advancement and leading many advanced countries and economies, according to the annual report that the UN Sustainable Development Solutions Network releases.

The DCD Chairman stressed that the growth witnessed in indicators of happiness and quality of life reflect the department’s interest in improving the quality of life for the Abu Dhabi community, in line with government directives to boost citizens and residents’ happiness and satisfaction and provide a decent standard of living for all community members.