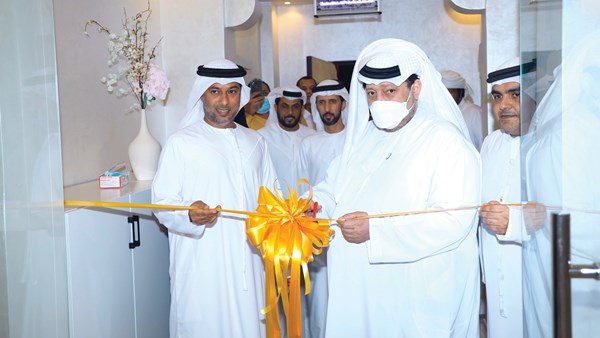 His Excellency Sheikh Dr. Saeed bin Tahnoon Al Nahyan inaugurated the Salt Cave, which is considered the largest man-made salt cave, followed by the Salt Cave in Dubai, and is the only artificial cave in the Middle East and the Arabian Gulf, originating from the first natural salt mine in Poland “Vialicka Mine” .In the city of Krakow. The salt cave is a natural remedy for about 18 ailments, including psoriasis, arthritis, sinusitis, asthma and eczema, as well as anxiety, snoring, allergies, colds, flu, congestion, ear infections, hay fever, rhinitis, breathing improvement for e.g. smokers and cystic fibrosis. The cave was opened in the Green Mubazzarah area of ​​Al Ain in the presence of Eng. Suwaidan Saeed Al Ketbi, Director of the Downtown Municipality Center, and Salem Hariz Al Rashidi.
The opening of the cave comes out of a zeal to provide the best service to the region and to Mubazzarah goers to build a healthy society as part of the state’s efforts to fight epidemics and infectious diseases, to be a unique experience with it purpose of cleansing and revitalizing the body and promoting health by inhaling raw salt dust that cannot be seen with the naked eye. The cave was built on an area of ​​171 square meters by experts in advanced technology so that its standards comply with international standards, and it can accommodate about 35 people with comfortable leather seats, a ventilation system, walls and floors covered with about 16 tons of natural salt, with a set units. It works by pumping air and salt and purifying it through air circulation, as it uses a special type of salt, and this type of salt has European approval, and the salt on the ground is replaced once every six months, while the salt for treatment is replaced after each session Award of a distinctive play area for children in the salt cave from the age of 6 months, and only one session is allowed per and the minimum treatment is 6 sessions, to ensure measurable results, provided that the sessions are attended for 6 consecutive days.

Tax Treaty between Kuwait and the UAE Signed