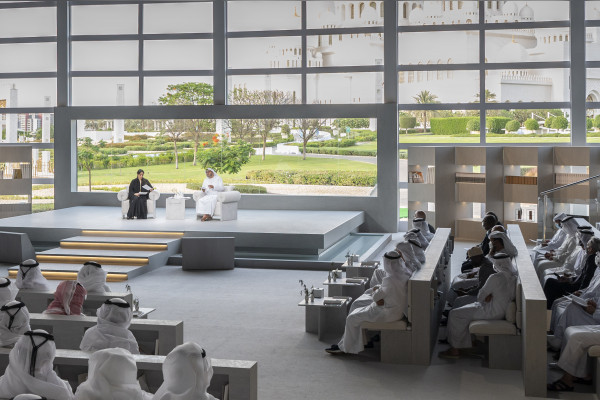 Presented by Dr. Anwar Gargash, Diplomatic Adviser to the UAE President, the lecture explored the UAE’s experience in maintaining global security and stability and its developmental model in light of ongoing global shifts, as well as ways to tackle current global challenges, key developments in the global ecosystem and other important topics.

At the beginning of the lecture, Dr. Gargash spoke of the UAE’s achievements. He said, “A few months ago, we celebrated the 50th National Day of the UAE. It was a celebration of five decades and the achievement of a vision of an enlightened leadership that believed in the capabilities of the UAE and its people to achieve greater development, science, and knowledge.

“Although a 50-year period is considered relatively short in the life of countries and peoples, the UAE has proven that the timeframe is not an important factor in the development of countries. During this period, we have been able to build a country with solid economic, political, and social foundations, which now plays a prominent role regionally and globally.”

Highlighting the UAE’s proactivity in tackling challenges, Dr. Gargash explained, “Despite the great achievements, we must be fully aware that there are many challenges that we must deal with to maintain this success as this requires continued efforts, especially since we live in a changing world and a complex region. The secret of the UAE’s success lies in its ability to identify challenges, deal with them, and transform them into opportunities.”

He further underscored the UAE’s keenness on building bridges of dialogue with all its neighbouring countries, including Iran, and its pledge to do them no harm, adding that it “will always resort to diplomacy, negotiation, and economic cooperation”.

Security and stability are closely related to the change in the world, he added. “Therefore, ensuring the strength of our influence, maximising our benefit from the process of change and the accompanying transformations leads us to realise the importance of union and collective action, whether it is the Gulf bloc or the Arab bloc.”

“Under the current changes in the region, it is necessary to manage matters peacefully with countries that have different policies and views, by working on the common grounds and putting differences aside. For example, Iran is a neighbor and therefore we endeavor to establish the best relations with it. We see that Turkey is a partner in our joint endeavor to prosperity and we continue to support the prospects of the Abraham Accords.”

Dr. Gargash said that, in light of the changes occurring in the international order, “we must establish concepts that contribute to the stability of the regional order. At the top of this is respect for the sovereignty of states and the absolute rejection of the use of force in regional relations, rejection of the role of armed militias, and regional joint cooperation to promote stability and prosperity and to build regional platforms to enhance multi-regional economic and investment dialogue and cooperation between parties”.

Stability in a region such as ours, which has been facing frequent crises and conflicts, represents a major challenge, he added. “This imposes many responsibilities on our country, and it is important to pass through these difficult times. Therefore, we must examine the transformations and changes carefully in the global scene, considering that the national interest is the overriding priority.

“From this standpoint, it is no secret that the UAE policy to deal with opportunities and challenges in the coming decades is based primarily on protecting our country by building an efficient and professional military with professional capabilities, establishing strong partnerships, and focusing on economic development.”

“Change is undoubtedly a constant feature of our world, and this change affects security and stability, which are the key pillars without which there could be no development,” Dr. Gargash elaborated. “Talking about change necessarily involves discussing the international order. As such, we in the UAE have to carefully monitor changes in the international order and their implications on the regional order, which consists of Arab and Gulf states as well as countries such as Iran, Turkey, Pakistan, and India.”

He continued, “It’s widely recognised that the international order will increasingly become multi-polar in the coming period,” adding that it will be an order that would not be controlled by a particular country, and is expected to continue this way.

“The transformations and changes that the world is going through are interrelated and overlapping, and they will have varying negative or positive outcomes on various countries. These represent opportunities and broader prospects for development and growth. Therefore, the national interest will remain the main factor for our interaction with this global scene, as we enhance the UAE status and its political and economic weight through openness to transformations. All of this is intended to maximise our benefits and safeguard our national interests,” Dr. Gargash added.

“At a time when the world is witnessing fundamental changes in the mechanisms of the international order, our region is witnessing important changes and developments. Foremost of which is the endeavor to enhance opportunities for peace and stability, and to reduce escalation, move the countries of the region away from the historical backgrounds that reinforced disputes. Perhaps this approach represents the best tool to confront what is happening at the global level and build our own regional model to ensure the security, stability, and development of the region,” he said, in conclusion.