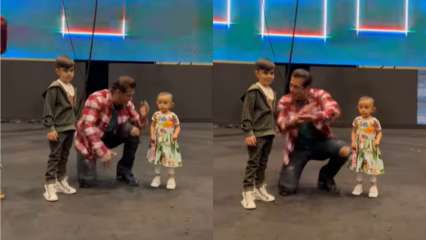 Salman Khan is now in Dubai for the ‘Da-Bangg’ The Tour Reloaded event. The actor trained with Pooja Hegde, Saiee Manjrekar and other actors who joined him in Dubai for the event ahead of his performance on Friday. Footage of Salman’s rehearsals has been circulating on social media.

Salman can be seen in one of the videos trying to get his nephew Ahil and niece Ayat to dance to his songs “Allah Duhai” and “Hud Hud Dabang”. However, the children seem to be nervous about performing in front of an audience.

Many followers of Salman Khan have gushed about his connection with children after the video went viral on social media.

Salman’s fan pages also contain a slew of images from his rehearsals with Saiee Manjrekar and Pooja Hegde. On his tour, he is joined by Aayush Sharma, Disha Patani, Sonakshi Sinha, Maniesh Paul and Guru Randhawa.

In another video, the Kick actor can be seen rehearsing the beautiful romantic song “Dil Diyan Gallan” from his movie “Tiger Zinda Hai” with Bollywood actress Pooja Hegde. Salman will perform alongside Pooja for the first time. For the movie ‘Bhaijaan’, which is due to start filming next month, the two will soon share screen space.

Meanwhile, Salman will soon be wrapping up filming ‘Tiger 3’ with newlywed Katrina Kaif. Salman was previously seen in Delhi NCR with the actress while filming the upcoming sequel to the ‘Tiger’ franchise. Several photos from the production have been circulating the internet showing both injured and bruised actors, hinting that the future film will be a complete cast. “Bhaijaan” and “Kick 2” are among the superstar’s many projects.