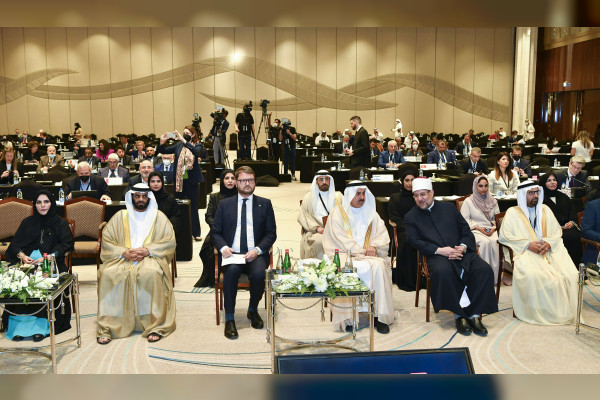 The two-day meeting, which is being hosted by the UAE, is witnessing the attendance of 120″ participants representing parliaments, governments, governmental and civil organizations.

During the inauguration, Saqr Ghobash, Speaker of the FNC, welcomed the meeting’s participants in the UAE, which has been keen to host PAM’s 16th General Assembly meeting, under the patronage of President His Highness Sheikh Khalifa, highlighting PAM’s distinguished stature as one of the most influential association that promotes peace, security and international cooperation.

He then pointed out that the FNC’s hosting of PAM’s meeting is due to its belief that such meetings are in line with the UAE’s foreign policy aimed at promoting the principles of openness to countries that adhere to peace, dialogue and tolerance.

“The Abraham Accords adopted by the UAE represent a new approach to solving the Palestinian-Israeli conflict that has lasted for over 70 years,” Ghobash said, noting the efforts of the UAE and Saudi Arabia to combat the terrorist attacks of the Houthi militias, which were listed by the United Nations (UN) Security Council as a terrorist organisation.

He also lauded the General Assembly’s selection of the three topics for discussion during the meeting, which highlights the common responsibility to address the situation in Arab and Mediterranean countries, expressing his hope for the meeting to produce positive and effective results that will help prevent wars and promote security, peace, coexistence and tolerance in the entire world, as well as lead to the revision of national and regional legislations and strategies aimed at strengthening the principles of coexistence and tolerance, achieving international peace and security, and addressing climate change and terrorism.

Gennaro Migliore, Speaker of the Mediterranean Parliament, expressed his happiness at welcoming the participants of PAM’s 16th General Assembly meeting, which is the first to take place in person since the start of the COVID-19 pandemic in 2020.

In his speech, Migliore said:”it is a great pleasure to welcome you all to the sixteenth plenary session of the Parliamentary Assembly of the Mediterranean, the first session to be held in attendance after the outbreak of the Corona pandemic in 2020.” He added that PAM will welcome two new members: the United Arab Emirates and Qatar, which have successfully and with a great deal of commitment completed the accession process in accordance with our rules and the previous Assembly resolution.

“In recent years, the UAE’s FNC has played an active role in PAM’s activities, most notably in terms of addressing terrorism and extremism,” he further added.

In a video message, Dr. Tedros Adhanom Ghebreyesus, Director-General of the World Health Organisation (WHO), highlighted the organization’s efforts to confront the health challenges facing countries and peoples of the world, and the efforts of parliamentary institutions to support the directions of governments and countries in facing the Corona pandemic and its modifiers.

Antonio Guterres, Secretary-General of the United Nations, in a message to PAM, invited the delegates to prepare the International Migration Review Forum to take place in May 2022, and to contribute to the preparations to the Summit on Transforming Education. “Parliaments are vital in putting people at the centre of policy” and “only together can we build a more peaceful and équitable world ”