Saqr Ghobash meets Speaker of Council of Representatives of Bahrain 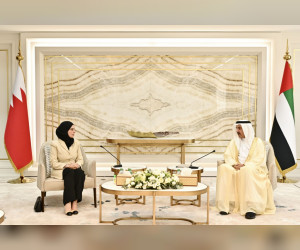 ABU DHABI, 2nd February, 2022 (WAM) — Saqr Ghobash, Speaker of the Federal National Council (FNC), today met with Fawzia Zainal, Speaker of the Council of Representatives of Bahrain, who is currently visiting the UAE, at an invitation from the FNC.

During the meeting, both sides discussed ways of strengthening the overall cooperation and partnership between the UAE and Bahrain, noting that their deep-rooted fraternal ties have witnessed significant development, supported by their leaderships.

They also discussed several issues of mutual concern, most notably how to encourage parliamentary diplomacy between the two countries. They addressed regional and global developments, combatting terrorism and extremism, preventing interference in the internal affairs of states, in addition to resolving conflicts through diplomatic means, achieving security and stability in the region and the entire world, and the UAE’s humanitarian and development efforts.

Zainal stressed that the deep-rooted relations between the two countries is an example of the distinguished ties between countries, thanks to the directives and visions of President His Highness Sheikh Khalifa bin Zayed Al Nahyan and His Majesty King Hamad bin Isa Al Khalifa.

She also highlighted the solidarity of the Bahraini parliament with the UAE concerning the recent Houthi attacks on civil facilities in the country. She noted Bahrain’s keenness to ensure the UAE’s security and extended her sincere condolences to the families of victims and wished the injured a speedy recovery.