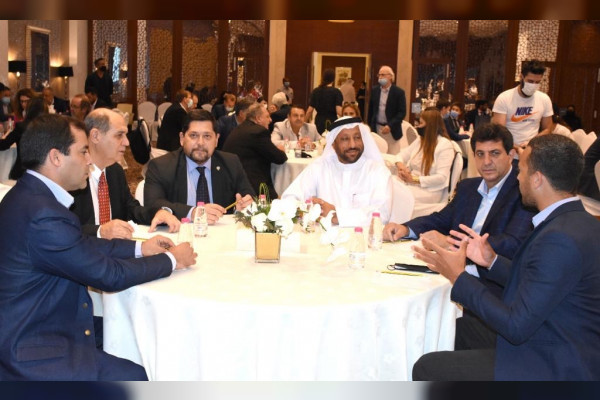 SHARJAH, 10th March, 2022 (WAM) — As part of Sharjah – Argentine Business Forum, the Sharjah Chamber of Commerce and Industry (SCCI) discussed with a high-level Argentinian delegation ways to enhance cooperation between the business communities in the Emirate of Sharjah and Argentina, to boost the economic, trade and investment relations to between their countries.

This came when Abdallah Sultan Al Owais, Chairman of the SCCI, received on Thursday, at the SCCI’s headquarters, a delegation that included presidents, ministers and officials of a number of Argentine provinces headed by Sebastián Lifton, Argentina’s Minister of Production and Labour, in the presence of several dignitaries, directors from the Sharjah Chamber of Commerce and Industry, along with representatives of the Argentine Embassy in the country, and a number of businessmen from both sides.

The attendees discussed various ways aiming to expand areas of cooperation between the two sides.

Al Owais welcomed the visiting delegation, stressing the keenness of the Sharjah Chamber of Commerce and Industry to strengthen areas of cooperation and coordination between Sharjah and Argentina, emphasising the importance of integrated work in order to raise trade and investment relations to better levels. Al Owais also highlighted the importance of joint work to advance the existing relations, contributing in achieving the aspirations of both sides.

He explained that the emirate of Sharjah enjoys several different components that enable it to be a regional center for economy and business.

For his part, Sebastián Lifton praised the strength of relations between his country and the UAE, and the Emirate of Sharjah in particular, noting their interest in attracting Emirati investors to take advantage of the opportunities available in the Argentine market through the establishment of new strategic economic partnerships between the two sides.

The Forum included a presentation of a film about the most prominent services provided by the Sharjah Chamber of Commerce and Industry to its affiliate members, businessmen and investors. The Argentine delegation also toured the corridors of the permanent exhibition of local industrial products located within the Chamber’s headquarters.