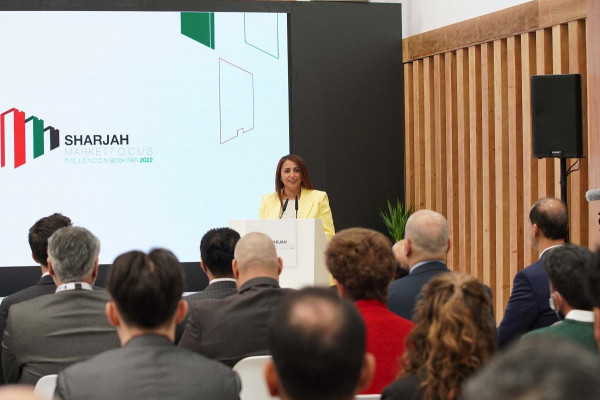 LONDON, 6th April, 2022 (WAM) — The 49th edition of the London Book Fair (LBF) has raised the UAE flag high in recognition of the cultural project of H.H. Dr. Sheikh Sultan bin Muhammad Al Qasimi, Supreme Council Member and Ruler of Sharjah, in the presence of renowned authors and publishers from around the world.

The emirate is being celebrated as LBF Market Focus this year in recognition of its continued leadership in building strong bridges of dialogue and cooperation between Arab and European nations, and for establishing itself as a cultural successful model of a knowledge-based society in which books are a pillar of sustainable development.

This came during the opening ceremony of the book fair, which is running at the Olympia Exhibition Centre in London from 5th – 7th April. Among prominent attendees of the event were Bodour Al Qasimi, President of the International Publishers Association (IPA); Sheikh Fahim Al Qasimi, Chairman of the Department of Government Relations (DGR) in Sharjah, who is heading the Sharjah delegation at the LBF 2022; Ahmed bin Rakkad Al Ameri, Chairman of the Sharjah Book Authority (SBA); Andy Ventris, Director of LBF; Stephen Lotinga, CEO of the Publishers Association, UK; Keith Nichol, Head of Cultural Diplomacy at the Department for Digital, Culture, Media and Sport (DCMS); and editors-in-chief of leading dailies in the UAE.

Addressing LBF’s global gathering, Bodour Al Qasimi said, “We believe that books go a long way towards helping countries and cultures understand each other, and they are needed now more than ever. In times of peace, books have a powerful uniting force. But, in times of conflict, books are even more critical in fostering hope, supporting reconciliation, and cementing peace.”

“Indeed, the world needs more books, not bombs,” she emphasised.

Bodour Al Qasimi also expressed her pride in representing her home city on LBF’s platform, where Sharjah is at the centre of global attention as Market Focus. “This is an opportunity to share our homegrown talent and culture, and demonstrate our love for books and their power to build bridges.”

In his keynote speech, Sheikh Fahim Al Qasimi conveyed the greetings of the Ruler of Sharjah, to publishers, representatives of cultural institutions, authors and intellectuals, for the hard work they are all putting in not only to shape a bright future for publishing but the world.

He further noted, “We have spent the better part of five decades building out the vision of His Highness The Ruler of Sharjah to design our city as a hub of reading, culture and publishing, and shape a knowledge economy rooted in the consolidation of Arabic literature’s place in the world. Today, we reap the fruits of these efforts with honours like the one we’ve been offered here – to showcase our cultural leadership and achievements in publishing as the London Book Fair Market Focus.”

For his part, Ventris said, “It is a great honour for us to celebrate Sharjah at the 49th edition of LBF. Sharjah, under the leadership of H.H. Dr. Sheikh Sultan bin Muhammad Al Qasimi, Supreme Council Member and Ruler of Sharjah, has provided a great deal to the global publishing market, and set itself apart through the Sharjah International Book Fair (SIBF), Sharjah Children’s Reading Festival (SCRF), and the SIBF Publishers Conference.”

He added, “The selection of Sharjah as Market Focus of the current edition was made to shine a light on the Emirati publishing sector. Therefore, we are keen on being introduced to the works and journeys of six distinguished Emirati authors and literary greats. We hope that LBF serves as a platform for cooperation and partnerships between London and Sharjah in sectors of translations, authorship and heritage.”

Lotinga emphasised that the Ruler of Sharjah’s vision has positioned the emirate at the centre of the publishing industry and raised its status as a beacon of knowledge in the Arab region. These achievements, he added, culminated in the emirate’s crowning as the UNESCO World Book Capital 2019.

Keith Nichol, Head of Cultural Diplomacy at the Department for Digital, Culture, Media and Sport (DCMS), said Sharjah is known around the world for its interest in culture, heritage, and arts, pointing out that London and Sharjah have deep and important cultural ties.

She said, “The date of Sharjah International Book Fair is at the top of the list in UK’s publishers and intellectuals agendas.”

During the opening ceremony, Emirati poet Afra Atiq recited a resonating poem that highlighted the power and impact of words and how they transcend time and generations.

Following the opening ceremony, and in the presence of Bodour Al Qasimi, Sheikh Fahim Al Qasimi, and senior Emirati officials, Ventris inaugurated the Sharjah pavilion. During a tour of the Pavillion, Ventris was briefed on the programme of participating entities, which has been designed to promote the Arab publishing industry as well as the region’s creative and literary movements and also encourage translations to and from the Arabic language.

The director was also briefed on the advanced infrastructure in the emirate that is geared towards pivoting publishers to international markets.