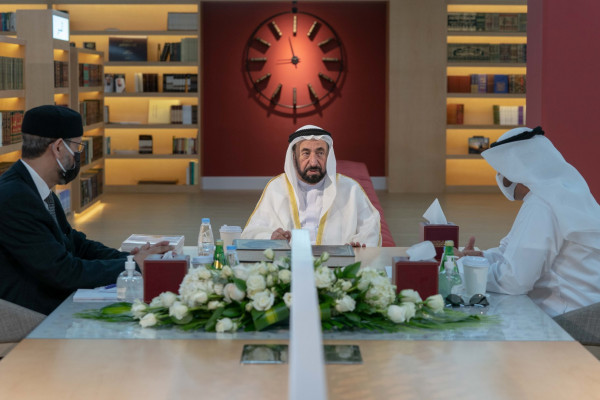 SHARJAH, 9th May, 2022 (WAM) — H.H. Dr. Sheikh Sultan bin Muhammad Al Qasimi, Supreme Council Member, Ruler of Sharjah and President of the Arabic Language Academy (ALA), chaired, on Monday, the periodic meeting of the ALA at its headquarters in the University City in Sharjah.

The meeting dealt with a number of topics related to the activities and efforts of the ALA in implementing its main competencies to preserve the Arabic language and support all its fields.

Dr. Sheikh Sultan approved a number of new projects that the ALA will work to implement in coordination with partners from institutions concerned with the Arabic language from different countries of the world.

He listened to a detailed explanation about the work progress in the ALA and its various administrative affairs, in order to provide a stimulating environment for its employees, provide the services necessary to perform their roles, and implement various activities.

The meeting included a discussion of ways to support Arabic language academies in order to achieve integration between linguistic academies to advance the Arabic language and work to enhance its global spread, and to come up with the best contributions at the level of publications of dictionaries, studies and research.

The meeting also discussed supporting the efforts of the Arabic language in the African and European continents in conjunction with the great spread of the language in many countries and the demand for it by various individuals and interested parties.

Dr. Sheikh Sultan was briefed on the latest developments in the completion of the historical dictionary of the Arabic language, which His Highness had launched the first 17 parts of it last November during the opening of the 40th edition of the Sharjah International Book Fair. His Highness highlighted keenness in achieving as much as possible during the coming period while preserving accurate dating and documentation.

The meeting also discussed plans to develop “Al Arabiya Lisani” magazine, which is issued by the ALA, in terms of knowledge and linguistic content, and diversification of linguistic and media fields.

We are proactive in efforts to conduct comprehensive curricula evaluation, development: Minister...