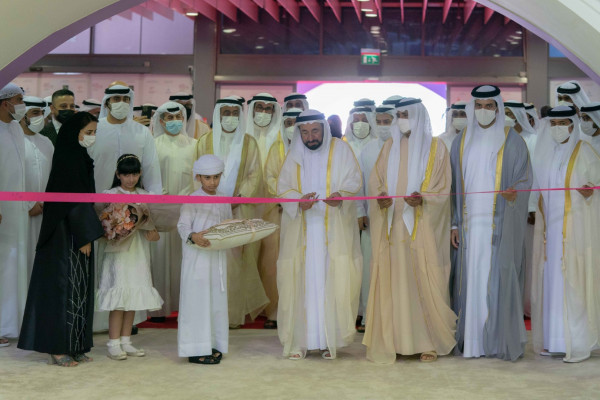 Upon his arrival, the Ruler of Sharjah was received by Sheikh Nahyan bin Mubarak Al Nahyan, Minister of Tolerance and Coexistence; Sheikh Salem bin Abdul Rahman Al Qasimi, Head of the Ruler’s Office; Sheikh Sultan bin Abdullah bin Salem Al Qasimi, Director of the Department of Statistics and Community Development, and a number of heads of local departments, senior officials, writers, publishers, and representatives of the media.

After the ribbon-cutting, Sheikh Sultan bin Muhammad watched a singing performance by a group of Sharjah children and toured the various corridors of the festival.

He was acquainted with the various activities and events offered by the festival for children, as well as the pavilions of the educational and cultural entities participating in the festival.

Sharjah Ruler was accompanied by two children, Mohammed Sami Saif Al Haj and Fatima Ahmed Obaid Sandal during his tour, as he listened to detailed explanations of the participation of the authorities in the festival.

The Ruler visited the pavilion of the Emirates School Foundation, Sharjah Education Council, Sharjah Private Education Authority, and the Ministry of Education, where he was familiarised with means and tools of teaching children, in addition to the various educational publications provided by authorities.

He also visited a number of pavilions of government institutions working in the field of publishing, support, care and education of children. He was briefed on the pavilion of the Rubu’ Qarn Foundation for Creating Leaders and Innovators, Contemporary Crafts Council (Irthi), Sharjah Police General Command, Department of Culture, Kalimat Group, Sharjah Heritage Institute, Department of Statistics and Community Development, Health Education Department and the Child Safety Department of the Supreme Council for Family Affairs, UAE Board on Books for Young People, Sharjah Broadcasting Authority, as well as a number of pavilions.

Ruler of Sharjah concluded his tour by visiting the Sharjah Children’s Book Illustrations Exhibition, where he was introduced to the exhibition’s drawings by participants from the United Arab Emirates and various countries of the world.