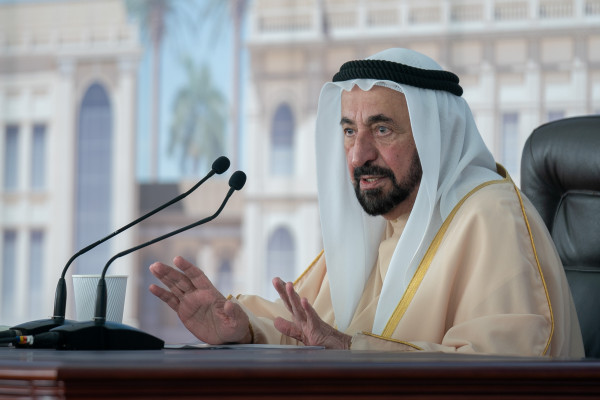 SHARJAH, 3rd March, 2022 (WAM) — H.H. Dr. Sheikh Sultan bin Muhammad Al Qasimi, Supreme Council Member and Ruler of Sharjah, stressed that the current and future projects in the Emirate of Sharjah in general, and in the Central Region in particular, have many positive returns and benefits for the region and its people.

Sheikh Sultan indicated that the impact of these projects extends to multiple paths in terms of developing the people of the region with useful science, reviving the region’s heritage, providing job opportunities, preserving the environment and its components and contributing to the advancement of its bio-environmental diversity.

This came in a speech delivered by H.H. Dr. Sheikh Sultan, on Thursday, in the presence of H.H. Sheikh Sultan bin Ahmed bin Sultan Al Qasimi, Deputy Ruler of Sharjah, during the laying of the foundation stone for the project of the Academy of Ecology and Natural Sciences (AENS) in Al Dhaid.

Sheikh Sultan maintained that the academy will work on graduating specialists through its integrated institutes concerned with studying desert sciences, agriculture, animal and veterinary sciences, stressing that the academy’s graduates will work in the various projects in the region after they are qualified by obtaining scientific degrees. In addition to working to raising awareness towards the environment, which contributes to the preservation of the available natural components of animal species, trees, seeds and others.

He said that the Desert Sciences Institute will be dedicated to studying desert science, water, and seeds, as the institute represents the specialised academic arm of the Seed Bank in Al Dhaid, which works to preserve the vegetation of the region by providing, producing and multiplying various seeds, contributing to the development of natural reserves.

Sheikh Sultan announced that the study at the academy will start next September, provided that the study provides diploma and bachelor degrees, where the student can obtain a diploma degree after completing two years in the specific specialisation, and continue for two additional years to obtain a bachelor’s degree.

The foundation stone laying ceremony for the academy was attended by a number of officials, heads and members of the municipal councils of the Central Region, and the notables of the region.