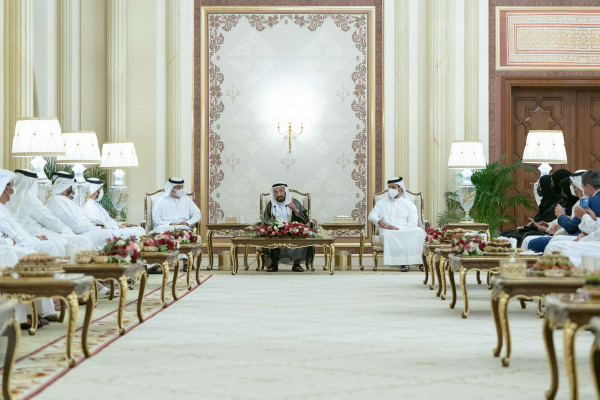 This came during His Highness the Ruler of Sharjah’s meeting with the chief editors of media institutions and a number of media professionals and journalists with whom His Highness exchanged Ramadan greetings in the presence of H.H. Sheikh Sultan bin Ahmed bin Sultan Al Qasimi, Deputy Ruler of Sharjah and Chairman of Sharjah Media Council.

The Ruler of Sharjah, at the beginning of the meeting, welcomed the attendees, thanking the efforts of Sheikh Sultan bin Ahmed Al Qasimi in leading the media in the Emirate of Sharjah and working to improve it, and his keenness to hold the annual meeting with media professionals.

His Highness praised the efforts of media professionals in various media agencies, writers, and daily newspapers in the country, pointing to his personal follow-up to what is written, published and broadcast, which confirms the importance of media work in serving the community and echoing all challenges, thus contributing to the advancement and education of society.

His Highness called on everyone who works in the field of media to pay attention to the word and direct it in the right direction for the benefit of society, and to stay away from what does not reflect the compassion, cooperation and authenticity of society, adding that writing is a great responsibility and that a journalist should always weigh his words and be on the right side, free and transparent, to benefit the people.

His Highness explained the insightful vision of the goals of media, reading and science, urging people to read to gain knowledge and education, adding that he has been calling for increased reading for fifty years, as reading takes one up to the peaks he endeavours to reach.

His Highness the Ruler of Sharjah highlighted the importance of the book and reading, recalling his memories of his journey with books since childhood and early school days, and encouragement of His Highness’s uncle, the late Sheikh Sultan bin Saqr Al Qasimi, who owned a library, where His Highness used to spend much time.

His Highness reviewed the beginning of the existence of books and their connection to people’s lives since ancient times and the documentation of historical events, from the days of Prophet Noah, peace be upon him, to our Prophet Abraham, peace be upon him, and the rest of the prophets, through our Jesus, peace be upon him, highlighting the importance of deep research to learn facts in all sciences.

His Highness recalled his journey with the book through the countries to which he traveled, as his connection with libraries was not severed in all his foreign trips, to the Kingdom of Saudi Arabia and the Kingdom of Bahrain during a trip to Hajj; then to the Arab Republic of Egypt when His Highness went to study at Cairo University, a trip His Highness described as a rich experience and constituted an important turning point for His Highness in the formation of knowledge and the acquisition of the mothers of books, by going to various libraries and following literary salons, despite the many study responsibilities His Highness had.

His Highness reviewed the Emirate of Sharjah’s march with culture, the necessity of the media’s participation in its dissemination, and the widespread interest in all members of society, in order to ensure new educated generations that know their history and identity.

His Highness explained the importance of participating in various international forums, such as book fairs, which give the opportunity to expand knowledge, to hold dialogue, to clarify facts and civilised communication with different nations in the world.

Then, His Highness read lines from the poem “The Sources of Glory”, which His Highness proudly wrote for Sharjah. The poem chronicles and narrates the bosom relation between Sharjah and the book, and reflects His Highness’s keenness to disseminate culture and to adopt it as a timeless message for the emirate. His Highness said:

-Sources of Glory come into sight and smile

-Pals of the pen, to you, a visit paying

-Ferries of light queued for possession -Assemblies of thoughts troop, the chance seizing

-I have come to you, holding in my hands

-Torches of thought with utmost craving

-I found you, some dead, some shackled

-I opened my heart, and therein I ingrained

-Tolerance and love, so consolidated

-I nurtured you knowledge and science

-Raised you high, a beacon among nations

-O Sharjah! Tell them about our meet in the twilight

-With rustles of papers and squeaks of pencils.

His Highness also touched on a number of his previous participations in a number of countries, and His Highness’s various dialogues with many Western intellectuals, and His Highness’s contribution to highlighting the role of Arabs and Muslims in human civilisation and clarifying the truth about many historical inaccuracies which contribute to the development of relations among countries and the exchange of knowledge.

His Highness concluded his speech with the media by calling for seeking knowledge and saying the right word that contributes to reforming society and paying attention to the great awareness role of the media in soundly and aptly guiding young people.