The Earth is facing a ‘triple planetary crisis’: climate disruption, nature and biodiversity loss, and pollution and waste, the UN warns 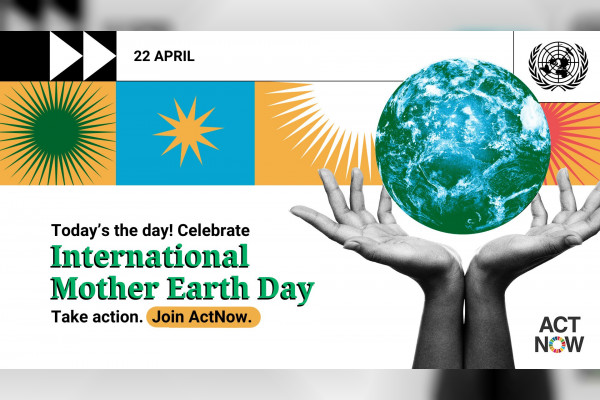 “This triple crisis is threatening the well-being and survival of millions of people around the world. The building blocks of happy, healthy lives – clean water, fresh air, a stable and predictable climate – are in disarray, putting the Sustainable Development Goals in jeopardy,” the UN Secretary-General warns in a video message for International Mother Earth Day 2022.

The good news is that there is still hope, António Guterres stresses, reminding us that 50 years ago, the world came together in Stockholm for the pivotal UN Conference on the Human Environment, which kickstarted a global movement.

“Since then, we have seen what is possible when we act as one. We have shrunk the ozone hole. We have expanded protections for wildlife and ecosystems. We have ended the use of leaded fuel, preventing millions of premature deaths. And just last month, we launched a landmark global effort to prevent and end plastic pollution.”

”International Mother Earth Day is a chance to reflect on how humanity has been treating our planet, and let’s face it: we’ve been poor custodians.” And while a steady stream of reports has painted a legitimately worrying picture of the current state of the planet, don’t lose hope: there are more innovative ideas for serious climate action than ever and more and more people around the world are working together on solutions to help repair the damage that’s been done to our fragile home.

The positive developments have not stopped there, the recently recognized right to a healthy environment is gaining traction and young people are more engaged than ever in the combat to take on our planetary threats, he adds.

“We have proven that together, we can tackle monumental challenges,” Mr. Guterres says.

Every year, April 22 is celebrated as International Mother Earth Day. The day is observed to create awareness about the rampant increase in pollution and other activities which directly or indirectly harm the environment and result in the destruction of the planet.

The theme for this year’s International Mother Earth Day – ”Invest in our Plane”.

EU to make $650 million in aid available to African Union

Adidas Is Introducing Its Halo Concept Store To Toronto This Year