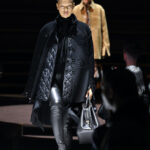 This was the fashion house’s first in-person catwalk in two years, following digital presentations in past seasons due to the COVID-19 pandemic.

For the evening, Tisci reimagined a trench coat as a strapless gown and offered frocks trimmed with feathers and black velvet shirts worn with long skirts and tuxedo jackets. Shiny metallics decorated some of the designs.

Celebrities including US actor Adam Driver and British supermodels Kate Moss and Naomi Campbell were in attendance to see the label’s most recent designs.

“It was important for me to explore what it means to belong, how our roots influence our identity and how the power of community and togetherness is what truly brings meaning to the world,” he said in a statement, also paying homage to London.

“The collection embodies an intangible essence that is Britishness, a unique fusion of honoring the beauty of the past, whilst also remaining focused on the future with thankfulness, hope and love,” he added.

Both Hadid sisters announced this week on Instagram that they will be donating their fashion month earnings toward relief efforts in Ukraine, which was invaded by Russian troops on Feb. 24.

They will also be donating any financial support they received during this fashion month to support relief efforts in Palestine.
Main category: LifestyleFashionTags: Irina ShaykGigi HadidBella HadidBurberry