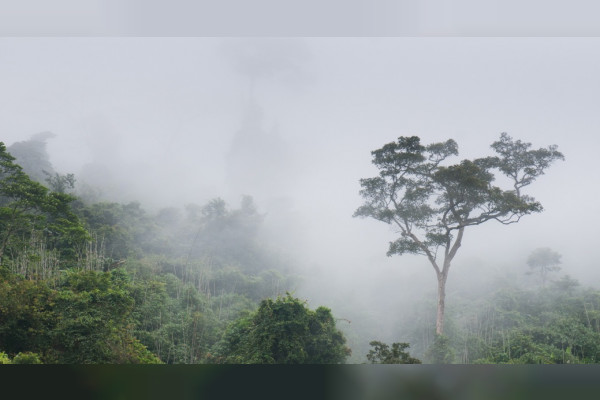 In a new study released on Thursday, they outlined different ways the Earth, its climate and its inhabitants rely on forests.

As every tenth of a degree of warming fuels threats from extreme weather and rising seas, lead author Deborah Lawrence said it is key to “acknowledge that tropical forests have a very important role in maintaining temperatures at a safe level”.

Cutting down forests puts at risk the Paris climate accord’s goal of capping the rise in global average temperatures at “well below” 2C and ideally 1.5C above pre-industrial times, as trees absorb about a third of carbon emissions produced worldwide.

The planet has already heated up by about 1.1C, bringing more extreme weather and higher sea levels.

Besides cooling, forests – including in tropical countries like Indonesia, Malaysia, Brazil and the Democratic Republic of Congo – also provide food and livelihoods, clean the air, support human health and are an essential habitat for wildlife.

But in 2020, an area of tropical forest the size of the Netherlands was lost, according to monitoring service Global Forest Watch.

During the hottest seasons, forests reflect sunlight back into space, absorb heat and release moisture that cools the air and helps form clouds, creating rainfall and conditions that protect local people and crops, the new study found.

Forests should be valued not only for their role in curbing emissions and as a source of carbon credits but also for the direct benefits they offer to local communities, said Lawrence.

The University of Virginia professor, who first began researching forests on the island of Borneo, called for more tree-planting initiatives in both urban and rural areas.

“Tropical forests are like a big insurance policy for the planet,” she said. “We give them up at our peril. We need to keep these forests around.”

Danny Marks, assistant professor of environmental politics at Ireland’s Dublin City University who did not contribute to the study, said healthy forests are vital to fighting climate change – both to limit emissions and adapt to a warmer world.

More should be done to stop rising deforestation in its tracks, he said, including providing new financing and placing a higher value on the services provided by forests.

Marks cited Costa Rica as a good example, where a tax on fossil fuels has enabled payments to protect nature and forests.