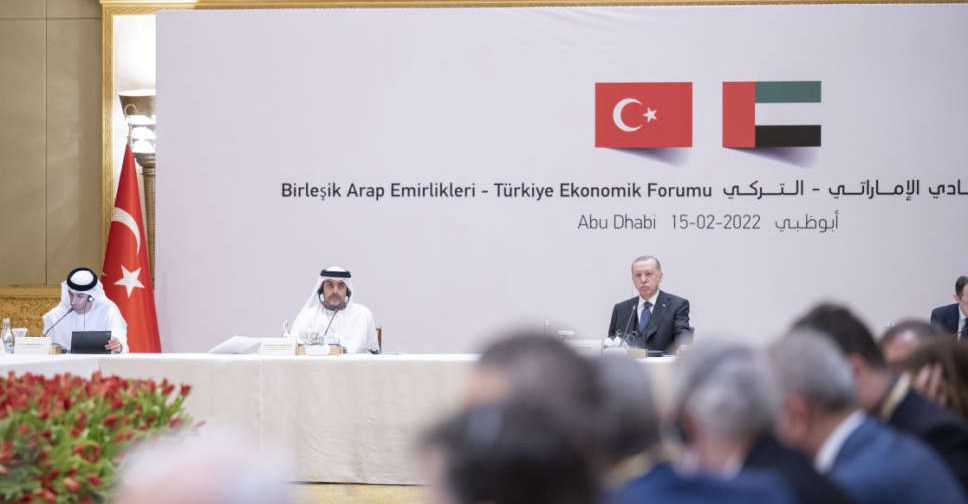 The meeting, which took place at the Emirates Palace, discussed the prospects for cooperation and joint investments between the UAE and Turkey, boosting partnerships and increasing commercial and investment relations, to support economic growth in the two countries.

At the start of the meeting, Sheikh Hamed welcomed President Erdogan and his delegation to the UAE. He noted that the bilateral ties between the two countries are rapidly growing, paving the way for widening partnerships between the two nations.

The trade value between the two nations has seen considerable growth, which is a clear indicator of the positive development in their economic partnership, he added. He highlighted the solid foundation of their commercial and investment relations and stressed that the meeting and its resulting partnership opportunities would drive further growth.

He stressed that the meeting between Erdogan and the representatives of major Emirati companies highlighted the keenness of the UAE’s leadership to boost cooperation and economic partnership and highlighted the importance of the meeting to achieve the mutual objectives of the leadership of both countries to enhance their economic, commercial and investment relations.

President Erdogan affirmed that a new phase began in the relations between the UAE and Turkey after His Highness Sheikh Mohamed bin Zayed’s visit to Turkey in November 2021. He noted that the two countries have a strong will to develop their ties, most notably in commercial and investment areas.

He notes the UAE is Turkey’s leading trading partner in the Gulf Cooperation Council (GCC) region and Turkey aims to enhance the bilateral ties between the two countries.

The two countries, he said, share a common interest in technology, an area which represents a viable prospect for increased cooperation between the two nations.