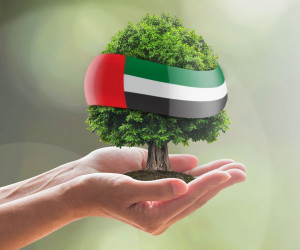 This year, the 25th edition of the event is being held under the theme, “Climate Action Now,” to raise the awareness of entrepreneurs and members of the community about climate change and its repercussions.

Climate action and strategies to reduce carbon emissions have become an integral part of the UAE’s development model, which aims to encourage environmentally-friendly investments and turn challenges into opportunities.

The recently published report by McKinsey, titled, “The Net-Zero Transition: What it Would Cost, What it Could Bring,” noted that aiming to achieve global carbon neutrality by 2050 will cost US$275 trillion. Governments, businesses and individuals will have to spend an additional $3.5 trillion per year. In return, this high cost of global investments in energy transition could increase international GDP, amounting to nearly $98 trillion per year by 2050.

A report by the International Renewable Energy Agency (IRENA), titled, “Transforming the Energy System,” also highlighted that nearly $3.2 trillion needs to be invested each year, nearly two percent of global GDP, to achieve the transition to low-carbon energy technologies.

Under this framework, the UAE’s comprehensive development plan for the next 50 years aims to reinforce its stature among advanced countries in accelerating the transition to a green economy, as the cornerstone of the recovery from the negative economic and social repercussions of the coronavirus (COVID-19) pandemic on all communities. Today, amidst the return to normalcy, the importance of investing in a green recovery has become clear, primarily through the adoption of plans by governments to support their economies, which requires drafting policies to address the decline in investments in environmentally friendly activities due to related preventive measures.

On National Environment Day, the UAE reiterates its commitment to following the path of the late Sheikh Zayed bin Sultan Al Nahyan and its adherence to implementing the policies, strategies, legislations, plans and programmes adopted by its leadership to ensure a sustainable future, by creating a balance between economic and social development and environmental protection.

The UAE has adopted a comprehensive policy with appropriate strategies and initiatives, including the UAE Net Zero by 2050 Strategic Initiative. It also launched the National Climate Change Plan of the UAE 2017-2050, a roadmap for supporting national activities and initiatives that aim to address climate change.

The UAE Cabinet adopted the UAE Circular Economy Policy 2021-2031, followed by the formation of the UAE Circular Economy Council. In 2012, the country adopted a green economy approach to support its sustainable development through the UAE Green Growth Strategy, in addition to the UAE 2021 Vision, a national strategy that includes several indicators to ensure sustainable environmental development.

The Ministry of Climate Change and the Environment also launched the National Climate Change Adaptation Programme to enhance the country’s resilience to the changing effects of climate change.

Climate change remains a crucial challenge for humanity and all forms of life on the planet, which calls for focussing future recovery plans and measures on the transition towards a green economy and the application of the principles of a circular economy, in addition to protecting the marine environment and preserving ocean health, to enhance the blue economy system.

The UAE’s interest in the green economy stems from its awareness of the importance of sustainable development while focussing on the environment and climate, conserving resources and improving living standards.

Therefore, climate action and strategies to reduce carbon emissions have become an integral part of the UAE’s development model. It aims to sustainably manage the economy, effectively utilise natural and environmental resources, promote a circular economy and sustainable consumption, reduce environmental stress, and encourage the private sector to adopt artificial intelligence and other technologies of the Fourth Industrial Revolution.

The UAE has sought to transition to clean energy over 15 years ago and now hosts three of the largest solar energy power plants in the world. The country is the first in the Middle East to operate a zero-carbon emission nuclear power plant, and the first country in the region to establish a carbon capture industrial facility.

Furthermore, it has also established the first green hydrogen industrial project in the region in May 2021, in addition to increasing the production of blue hydrogen as part of its efforts to diversify its sources of energy.

The UAE plans to cultivate 100 million mangroves by 2030, and is exploring other solutions to help reduce emissions in the agricultural sector, which constitutes one-fourth of the world’s emissions that links climate change to food security. Therefore, the UAE has invested significantly in agricultural technologies.

On the international front, the UAE launched, in cooperation with the US, the Agriculture Innovation Mission for Climate (AIM for Climate), which is a key international initiative, with the participation of over 35 countries. The country is also preparing to host the 28th Conference of the Parties (COP 28) in 2023.

The UAE was an active player in the negotiations that led to the adoption of the United Nations Framework Convention on Climate Change, the Kyoto Protocol and the Paris Agreement, and facilitated related international negotiations by hosting international events.